PLA launches missile drill to east of Taiwan as Pelosi arrives; China to turn on a new status quo for Taiwan situation as ‘US has broken the old one’

The People’s Liberation Army (PLA), on the night that US House Speaker Nancy Pelosi landed in Taiwan for her provocative visit that violates the US promise of opposing “Taiwan independence” secessionism, launched massive military drills around the island of Taiwan, including a long-range live fire drill in the Taiwan Straits and a live fire conventional missile drill to the east of the island, with analysts saying China is not merely targeting a visiting 82-year-old US politician, but is eyeing the anti-secession campaign against the secessionist Taiwan authorities and is to concretely speed up the reunification process.

The PLA will also conduct a series of live fire military drills from August 4 to 7 in six different areas that encircle the island of Taiwan from all directions, according to the Xinhua News Agency after Pelosi landed at the Taipei airport. Analysts said there are many options on the table for China to speed up the reunification process. Apart from military drills, the options could include striking Taiwan military targets, just as the PLA did in the previous Taiwan Straits crisis, pushing new legislation for national reunification, sending military aircraft and vessels to enter the island’s “airspace” and “water areas” controlled by the Taiwan authorities and ending the tacit cease-fire with the Taiwan military. 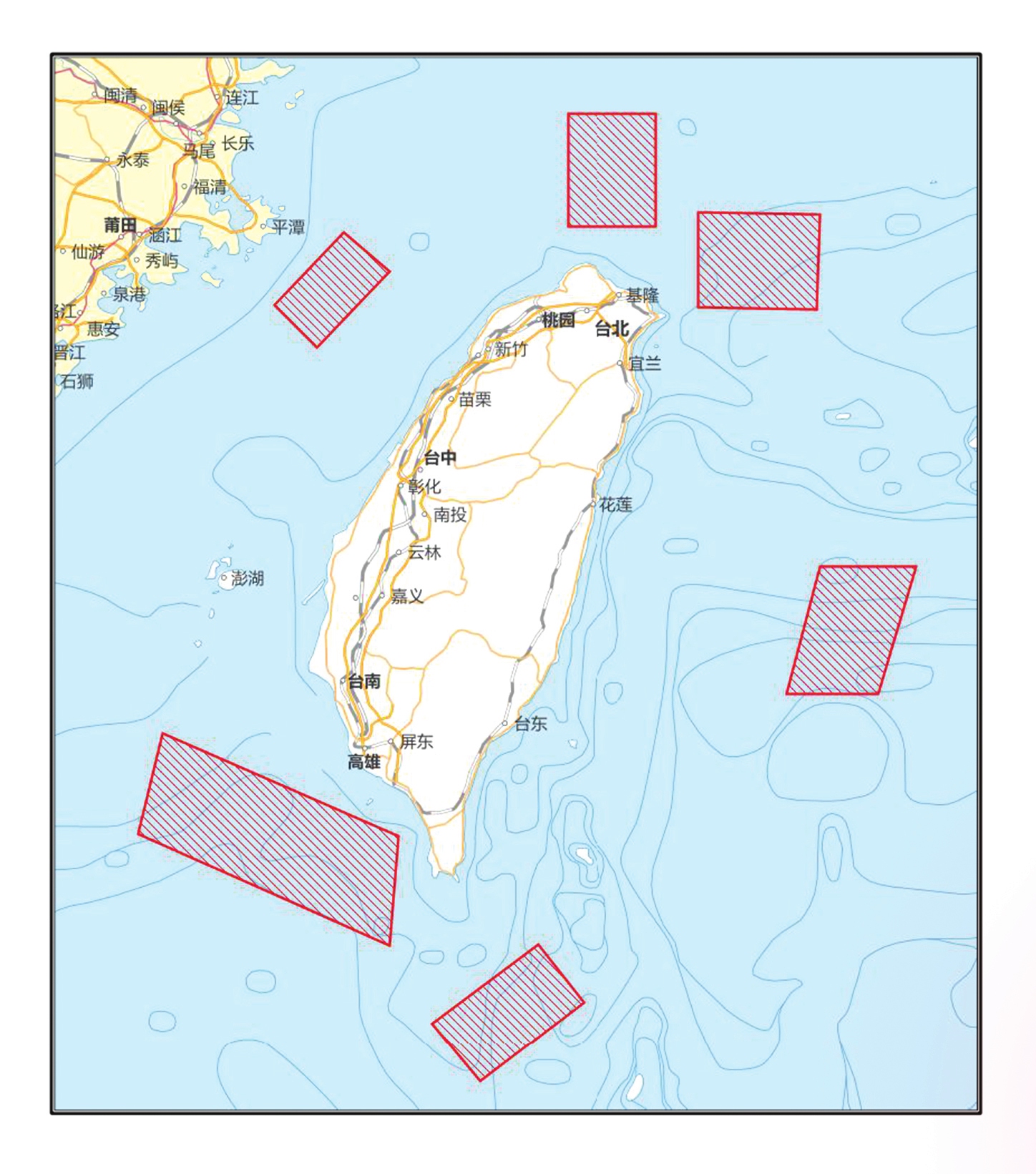 A sketch map shows the six regions where the People’s Liberation Army will conduct important military exercises and training activities including live-fire drills surrounding the Taiwan island from August 4 to 7, 2022. Photo: Xinhua 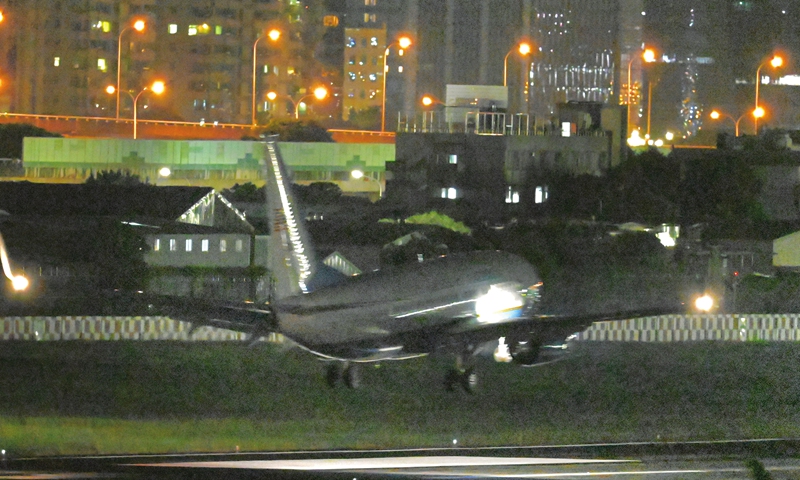 A US military aircraft with US House Speaker Nancy Pelosi on board prepares to land at Songshan Airport in Taipei, the Taiwan island, on August 2, 2022. Pelosi landed in the island on the evening that day. Photo: AFP

Participating in the drills, J-20 stealth fighter jets took off from an airfield on Tuesday evening, with launchers of rockets and missiles also mobilizing under shades of the night, a report by China Central Television showed.

Chinese Vice Foreign Minister Xie Feng summoned US Ambassador to China Nicholas Burns on early Wednesday morning to protest against Pelosi’s visit to Taiwan island. The nature of Pelosi’s visit is extremely vicious and the consequence is very grave. The Chinese side will not sit idly by, Xie told Burns.

China will definitely take all necessary measures to resolutely safeguard its sovereignty and territorial integrity in response to the US Speaker’s visit. All the consequences must be borne by the US and the “Taiwan independence” separatist forces, the Chinese Foreign Ministry said in the statement.

The secessionist DPP authority colluded with the external forces and insisted on inviting Pelosi to Taiwan, which is extremely dangerous and will trigger severe consequences. The Ministry of National Defense said the PLA will conduct a series of targeted military operations to take countermeasures in safeguarding sovereignty and territorial integrity and crack down on the external interference and secessionist attempts.

Based on the frequent releases from Chinese governmental departments and the announced military drills, China is fully prepared for Pelosi’s provocative acts, and it is certain that China will take a series of actions to make a strong response to the US provocation, experts said.

There is no reason for China to be nervous, because such a political show made by Pelosi will not change the overwhelming advantages, especially the military one, held by the mainland against the Taiwan authorities and the US in the region. Nor will the trip provide any possibility of “Taiwan independence,” and it cannot change the unshakable hard fact that Taiwan is part of China, said experts, noting that what China needs to do is to use this incident to maximize its advantage and keep pushing the reunification process.

The announced PLA drills, likely to be larger in scale than the one in the 1996 Taiwan Straits crisis, serve not only as warnings to the US and “Taiwan independence” secessionists, but also as rehearsals for the PLA to reunify the island by force, experts said, noting that missiles could fly over the island.

Immediately after Pelosi’s plane landed in Taipei on Tuesday evening, the PLA Eastern Theater Command announced it will start a series of joint military operations around the island of Taiwan starting Tuesday evening.

This means the island of Taiwan will be surrounded by PLA drills in five directions.

The joint maritime and air exercises in the north, southwest and southeast will likely hone the capabilities of warplanes and warships to seize air superiority and control of the sea; the long-range live-fire shooting in the Taiwan Straits will likely feature long-range multiple rocket launchers that can strike targets on Taiwan island directly from the mainland; the conventional missile test launches to the east of the island means that, if the missiles were launched from the mainland, they would fly over the island of Taiwan, analysts said.

It’s also possible that the missiles will be launched from the PLA Navy vessels that are sailing to the east of the island, said military experts, noting that the move will target the external forces that try to intervene in the reunification process from the east.

The operation is a stern deterrence against the US’ recent negative move and major escalation on the Taiwan question, as well as a serious warning for “Taiwan independence” secessionist forces’ attempt to seek “independence,” Shi said.

The drills will comprehensively test the performance of weapons and equipment as well as the troops’ joint operational capabilities in order to be ready for all crises, Gu said.

The troops of the PLA Eastern Theater Command are fully confident and capable of fighting back at any provocation and resolutely safeguard national sovereignty and territorial integrity, Gu said.

Just as Pelosi’s flight was about to land, official Chinese mainland media reported that a Su-35 fighter jet(s) of the PLA Air Force was flying across the Taiwan Straits. Observers said that the PLA aircraft’s activity could be part of the drills.

In a separate event, the Xinhua News Agency released a notice announcing that the PLA will conduct important military exercises and training activities including live-fire drills in six large maritime areas and their air space surrounding the island of Taiwan, in its north, northeast, east, south, southwest and northwest, from Thursday noon to Sunday noon.

For safety reasons, entering of vessels and aircraft to those sea and air space is prohibited, Xinhua said.

The report did not give more details on the drills, but experts said that more realistic combat-oriented training courses like the drills that started on Tuesday are expected, including those featuring aircraft carriers.

A report by state broadcaster China Central Television on Saturday revealed for the first time a scene in which what seems to be a DF-17 hypersonic missile was fired. The missile, despite its hypersonic characteristics, is a conventional weapon.

Analysts said that the drills could be greater than the one held in the Taiwan Straits crisis in 1996.

Chinese analysts said the struggle between China and the US at this point is about dignity and concrete strategic interests, but the latter is much more important, so China will not merely focus on playing a game of chicken and hawk with Pelosi, as changing the whole situation of the region is much more significant and valuable.

Lü Xiang, a research fellow at the Chinese Academy of Social Sciences, told the Global Times on Tuesday that China’s reaction will not just be a momentary action but will consider the whole security mechanism of Taiwan.

“Based on the released information about the PLA drills from August 4 to 7, the six locations have already encircled the island of Taiwan from all directions, and it could be a series of unprecedented military exercises aimed at realizing reunification by force and also to fight against the external forces that could interrupt the reunification process,” Lü said.

Because of Pelosi’s arrival at the Taipei airport that totally ignored China’s warning, it is certain that the status quo of the Taiwan Straits situation has been broken, and China will make it enter a new status quo, Lü stressed.

The Chinese mainland really knows the importance of “strategic patience,” just like when many people expected that China would crack down on the Hong Kong turmoil in 2019 with force when rioters attacked the central government’s liaison office, but the facts prove that China did not act in that way but eventually realized a land-slide victory to reinforce its governance in Hong Kong. “So this time, China will teach the US a lesson again, as it will use US mistakes to comprehensively change the Taiwan Straits situation, just as it did in Hong Kong in recent years,” said a Beijing-based senior expert on international relations who asked for anonymity.

Wang Jiangyu, a professor of law at the City University in Hong Kong, said China will use this incident to strengthen its sovereignty claim over Taiwan. “For instance, sending squadrons of military aircraft to enter the ‘airspace’ of Taiwan, or sending military vessels to enter the ‘water areas’ controlled by the Taiwan military,” he said.

These are unprecedented acts of declaring sovereignty over Taiwan, and if China can send its tough signal of determination to effectively contain the provocations made by the US and other Western countries, the situation will be in favor of the Chinese side in the future, Wang said.

Song said the mainland could also consider speeding up legislation for a national reunification law and even publish a timetable for reunification which will impose real pressure on the US and Taiwan authorities.