KYIV/KHARKIV, April 20 (Reuters) – Russia gave Ukrainian fighters still holding out in Mariupol a fresh ultimatum to surrender on Wednesday as it pushed for a decisive victory in its new eastern offensive, while Western governments pledged more military help to Kyiv.

Thousands of Russian troops backed by artillery and rocket barrages were advancing in what Ukrainian officials have called the Battle of the Donbas.

Russia’s nearly eight-week-long invasion has failed to capture any of Ukraine’s largest cities, forcing Moscow to refocus in and around separatist regions.

The biggest attack on a European state since 1945 has, however, seen nearly 5 million people flee abroad and reduced cities to rubble.

Russia was hitting the Azovstal steel plant, the main remaining stronghold in Mariupol, with bunker-buster bombs, a Ukrainian presidential adviser said late on Tuesday. Reuters could not verify the details.

After an earlier ultimatum to surrender lapsed and as midnight approached, Russia’s defence ministry said not a single Ukrainian soldier had laid down their weapons and it renewed the proposal. Ukrainian commanders have vowed not to surrender.

“Russia’s armed forces, based purely on humanitarian principles, again propose that the fighters of nationalist battalions and foreign mercenaries cease their military operations from 1400 Moscow time on 20th April and lay down arms,” the Russian Defence Ministry said.

The United States, Canada and Britain said they would send more artillery weaponry.

U.S. President Joe Biden is expected to announce a new military aid package about the same size as last week’s $800 million one in the coming days, multiple sources told Reuters.

U.N. Secretary-General Antonio Guterres called for a four-day humanitarian pause in the fighting this coming weekend, when Orthodox Christians celebrate Easter, to allow civilians to escape and humanitarian aid to be delivered.

Russia says it launched what it calls a “special military operation” on Feb. 24 to demilitarise and “denazify” Ukraine. Kyiv and its Western allies reject that as a false pretext. 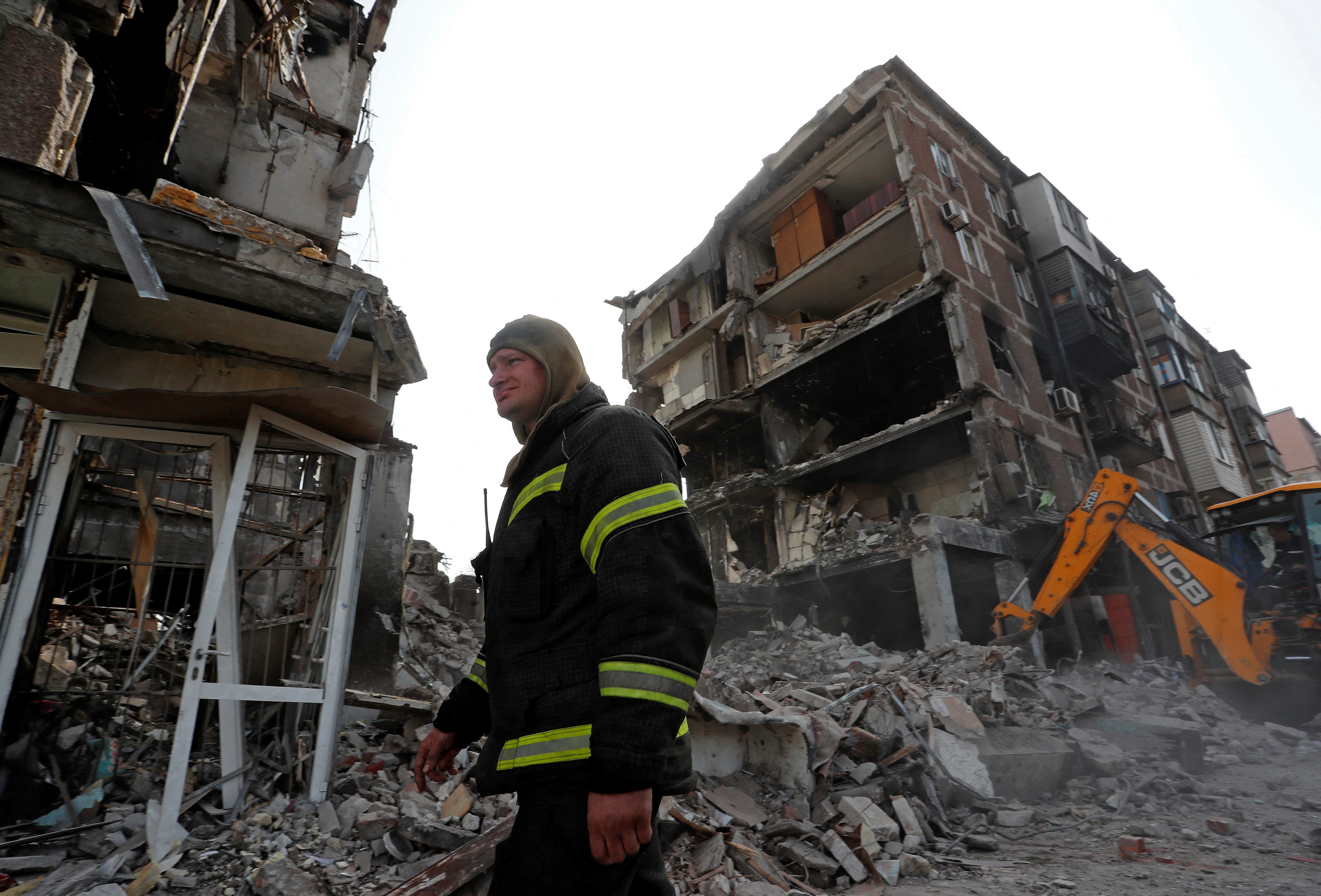 A rescuer works at a residential building damaged during Ukraine-Russia conflict in the southern port city of Mariupol, Ukraine April 19, 2022. REUTERS/Alexander Ermochenko

Ukraine said the new assault had resulted in the capture of Kreminna, an administrative centre of 18,000 people in Luhansk, one of the two Donbas provinces.

Russian Foreign Minister Sergei Lavrov confirmed that “another stage of this operation is beginning”.

Driven back by Ukrainian forces in March from an assault on Kyiv in the north, Russia has instead poured troops into the east for the Donbas offensive. It has also made long-distance strikes at other targets including the capital.

The coal- and steel-producing Donbas has been the focal point of Russia’s campaign to destabilise Ukraine since 2014, when the Kremlin used proxies to set up separatist “people’s republics” in parts of Luhansk and Donetsk provinces.

Mariupol has been besieged since the war’s early days. Tens of thousands of residents have been trapped with no access to food or water and bodies litter the streets. Ukraine believes more than 20,000 civilians have died there.

“The Russian army will forever inscribe itself in world history as perhaps the most barbaric and inhuman army in the world,” President Volodymyr Zelenskiy said in a video address.

“Deliberately killing civilians, destroying residential quarters and civilian infrastructure, and using all kinds of weapons, including those prohibited by international conventions, is already the brand signature of the Russian army.”

Russia has denied using banned weapons or targeting civilians in its invasion of Ukraine and says, without evidence, that signs of atrocities were staged.

Video released by Ukraine’s Azov battalion purported to show people living in the underground network beneath the steel plant, where they say hundreds of women, children and elderly civilians are sheltering with diminishing supplies.

“We lost our home; we lost our livelihood. We want to live a normal, peaceful life. We want to get out of here,” an unidentified woman says in the video.

“There are lots of children in here – they’re hungry. Get us out of here, we beg you. We’ve already cried out all the tears we have. We can’t cry anymore,” she added.

Reuters could not independently verify where or when the video was shot.

Kyiv and Moscow have not held face-to-face talks since March 29. Each side blames the other for their breakdown.

“Obviously, against the backdrop of the Mariupol tragedy, the negotiation process has become even more complicated,” Ukrainian presidential adviser Podolyak told Reuters.