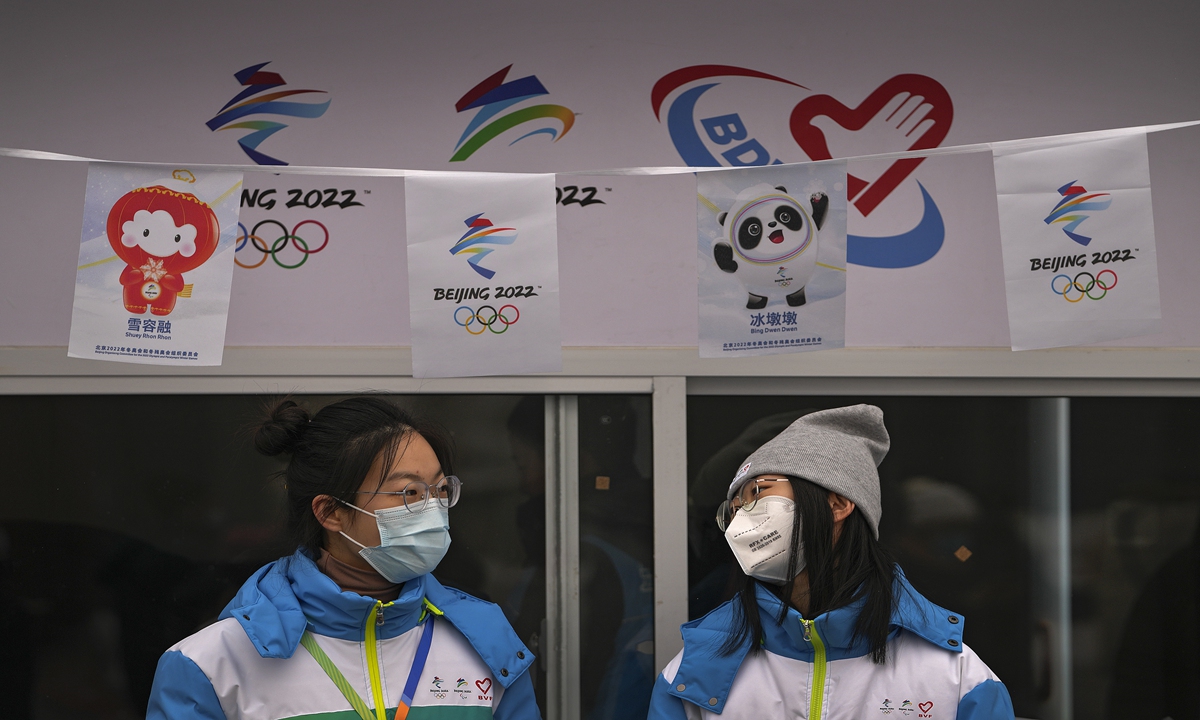 GT: Three Olympic villages for the coming 2022 Winter Olympic Games opened for  pre-Games trials on Sunday. Athletes and Olympic committee officials from countries and regions who are going to participate in the Games have been arriving in Beijing, and a full dress rehearshal of the opening ceremony was held over the weekend. In just 10 days, more than 2,800 athletes from nearly 100 countries and regions will usher in their career highlights, and hundreds of millions of viewers around the world will witness a winter sports event of the highest caliber.  To present a “faster, higher, stronger, more united” performance, athletes from all over the world have trained hard for countless days and nights. The International Olympic Committee and national Olympic committees of countries and regions have put in a lot of effort, and in Beijing, the host city, there have been years of careful preparations. Because of the COVID-19 pandemic, everyone has to pay more and bear more. All these efforts must not be for naught. It’s an exceptionally rare global grand and festive event to hold the Beijing Winter Olympics under the shadow of the pandemic. People around the world are looking forward to its arrival with sincerity, and Beijing has been getting everything ready. Some relavant Winter Olympic Games staffers who already arrived in Beijing in advance have eagerly shared their experiences on social media platforms, making the atmosphere of the event gradually heat up. This presumably has made some politicians in Washington uncomfortable. Out of disgraceful selfishness, the US government has tried had to incite its allies to “diplomatically boycott” the Beijing Winter Olympic Games, but only a few petty followers responded and most of the US’ allies haven’t danced to Washington’s tune. The US itself eventually is sending 46 officials to attend the Beijing 2022 Games. The “diplomatic boycott” has completely turned into a farce. As the Omicron variant spreads across the globe, hindering and even interrupting people-to-people exchanges between countries, the difficulties of hosting a successful Winter Olympic Games are self-evident. China is doing its best to ensure that athletes from all countries and regions compete in a safe environment through efficient and rigorous organization and mobilization. This has vividly manifested that China is fulfilling its commitments and is also conducive to building global cohesion in solving common conundrums. Respect the Olympic Games and transcend political differences – this is the common wishes of the international community. At the G20 summit held in Rome at the end of October last year, world leaders said in their G20 Rome Leaders’ Declaration, “We look ahead to Beijing Winter Olympics and Paralympics 2022, as opportunities for competition for athletes from around the world, which serves as a symbol of humanity’s resilience,” despite obstruction from certain countries. The Beijing Winter Olympic Games is not a stage for anti-China politicians, but an event for athletes from all over the world. IOC President Thomas Bach emphasized that support from the international community for these Winter Games is evident and is very much welcomed. The pure ice and snow sports cannot tolerate dirty political calculations. Anyone who attempts to disrupt and sabotage the unity either by making an issue of the Winter Games or by manipulating the athletes will be framed as a clown in history.  China has a tradition of hospitality and has made the Beijing Winter Olympic Athletes’ Village (and the Beijing Winter Paralympic Athletes’ Village as well) a place that the athletes will call a “home away from home.” China has made environmental protection a prominent feature of the Beijing 2022 Games, from low-carbon venues to green electricity supply, historically presenting a carbon-neutral event. There is every reason to believe that athletes from all countries and regions will prepare and compete safely and securely in a comfortable and convenient environment, enjoying a high-quality ice and snow event. Anyone who tries to plague and disrupt the Winter Games at this time will be smearing Beijing with subjective malice and tarnishing the Olympic culture with objective consequences, disregarding the whole world. Washington’s political maneuvering around the Beijing Winter Olympics will only become a splash of ice under the athletes’ feet, which is disdainful. Before the 2008 Beijing Olympic Games, some politicians in the US and the West also made seemingly violent calls for a “boycott.” But as time passed, what people eventually remembered was the brilliant fireworks over the Bird’s Nest, the athletes’ performances, and Juan Antonio Samaranch’s comment that the 2008 Beijing Olympic Games “have been the best I have ever seen.” We have no doubt that the 2022 Beijing Winter Olympics will be a page of struggle, unity and joy in the future history books.