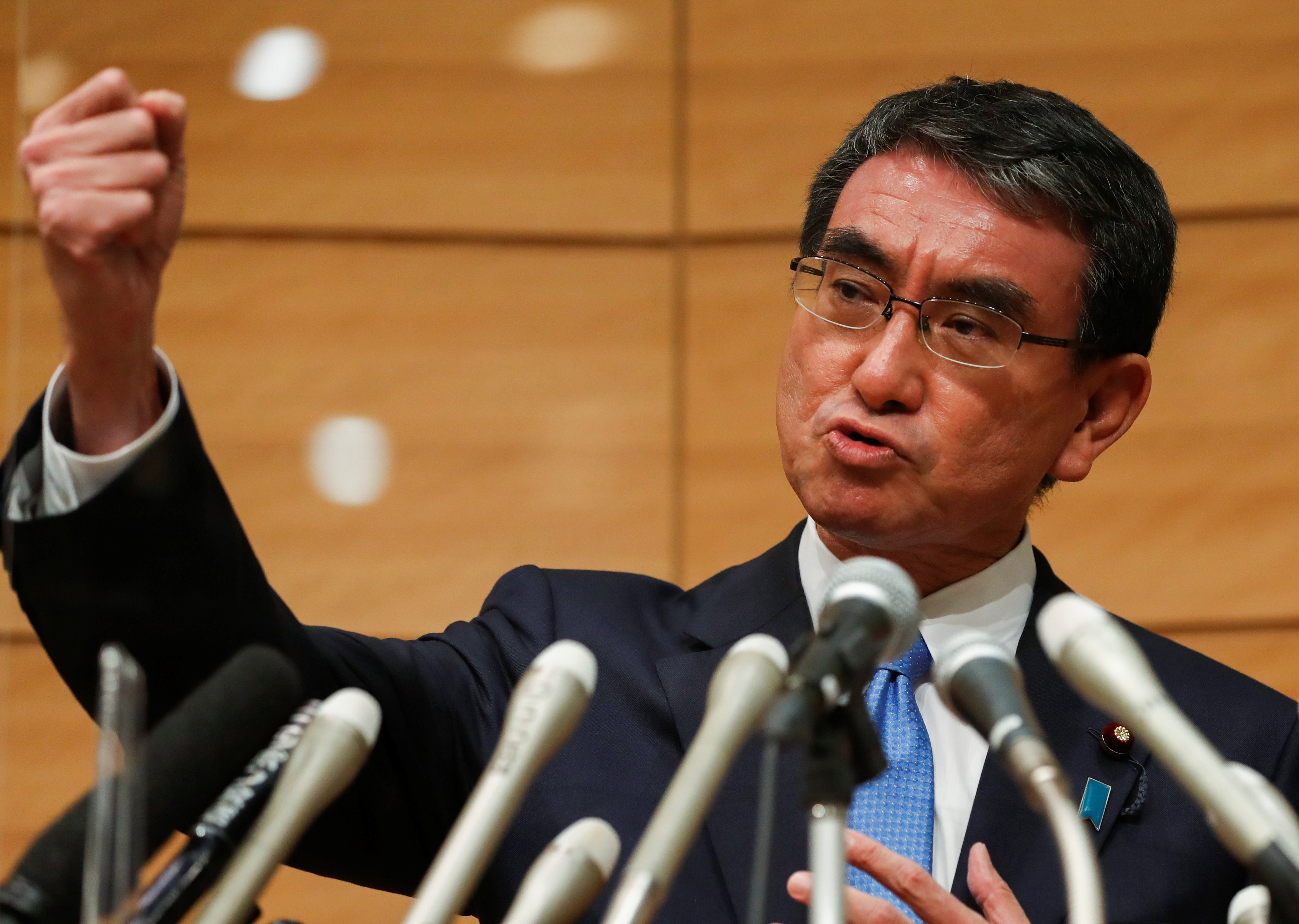 TOKYO, Sept 14 (Reuters) – When Taro Kono, Japan’s leading contender to be prime minister, was a senior in high school, he asked his father to send him overseas for university, but was flatly refused.

Instead, the elder Kono, a leading politician in the ruling party, took his son to a U.S. embassy reception in a bid to prove his English was not good enough.

But the move backfired.

“I went around the room telling people enthusiastically, in my broken English, how I wanted to study abroad but my father was against it, so I had a problem,” Kono wrote in a recent book.

Everyone said no, he should wait. But that response, and perhaps his son’s audacity, somehow convinced the father, and Kono wound up spending four years at Georgetown University in Washington, D.C.

Now 58, Japan’s popular vaccines minister is fluent in English and hopes to parlay that early combination of self-belief, strategy and stubbornness into becoming leader of the conservative ruling Liberal Democratic Party (LDP) and prime minister.

In addition to a resume studded with high-profile portfolios such as foreign affairs and defence, he runs a Twitter feed in two languages and, in a world of staid politicians, speaks bluntly, by contrast with Prime Minister Yoshihide Suga.

“He’s always out there, giving press conferences on the vaccine rollout and so on,” Wallace added. “Suga looked like he only communicated when he absolutely had to.”

Kono regularly tops opinion polls as voters’ choice for the next prime minister, which will help him with both rank-and-file members in the LDP contest, and young lawmakers worried about keeping their jobs as a general election looms this year.

Image, at which Kono excels, could trump policy, said Airo Hino, a professor of political science at Waseda University.

“Lawmakers are definitely going to pick who they think is better for re-election,” Hino added.

“They’re thinking of election posters, and their faces on them with the LDP president. This is especially true in urban areas, and with the young.”

Kono’s outreach has flourished on social media, where he has garnered 2.4 million followers on Twitter.

The whimsical posts of early this year, featuring memes, his lunch, or a mask with a dinosaur skull, have shifted to promoting the vaccine and highlighting online policy meetings.

That Kono had forged a genuine connection with those who do not usually care about politicians became clear when debate erupted online after he blocked some of those who disagreed with him on Twitter.

But that incident also throws light on one of his biggest weaknesses, say analysts.

In 2019, when foreign minister, Kono berated the South Korean ambassador during a meeting in front of cameras, telling him he was “extremely rude”.

These memories stir consternation in South Korea, already nervous about the conservative stance Kono took on key policies when a cabinet minister.

That is a contrast with his father, Yohei Kono, the chief cabinet secretary who authored a landmark apology in 1993 to “comfort women,” a euphemism for those forced to work in Japan’s wartime brothels.

South Korean media have played up his hardline stance, and some commentators fear already-strained ties might not improve.

But at home there is hope that Kono, whose maverick nature brings to mind the wildly popular Junichiro Koizumi, prime minister from 2001 to 2006, may be able to get things done.

Analysts say most of the blame for Japan’s handling of the pandemic has landed on Suga, sinking his cabinet, while Kono has built an image of working hard on the vaccine rollout.

Japan’s emergency measures achieved little until recently to curb virus infections that swamped its hospitals, but after a slow start vaccination rates have risen to a little more than half, pulling close to the United States and other G7 nations.

“He … overcame all the hurdles and bureaucratic excuses notably made by the ministry of health,” said Kenji Shibuya, former director of the Institute for Population Health at King’s College London, who directed municipal vaccinations in Fukushima prefecture, north of Tokyo, the capital.

“I think he is the only candidate who can challenge the status quo.”

But first Kono must win, which means he will have to overcome the deep-seated fears of party elders that he could be difficult to keep in check.

“That’s not to say Kono is completely against what the party wants to do,” Wallace added. “But he will be his own prime minister, one way or another.”

Kathmandu: The ruling coalition has agreed to give special importance to the Madhav Nepal-led CPN (Unified Socialist), which was formed after rebelling against the CPN-UML,

Kathmandu : On the occasion of the Constitution Day, President Bidya Devi Bhandari has presented

Need to realize the aspirations of the people: President

Kathmandu : President Bidya Devi Bhandari has said that it is our eternal duty to

US and Nepal have collaboration in common challenges: US Secretary of State

Washington : US Secretary of State Anthony Blinken has said the 75-year friendly relations between

Kathmandu : Another 1,066 people have been confirmed infected with the corona virus in Nepal.

Not only KP Oli but also anti-federalism element is the reason for the Party split- Upendra Yadav, Chair-JSP

Kathmandu: Although two months have passed since the formation of the government led by Prime

Oli slams the Govt. coalition : ‘like ice cubes taken out of the fridge’

Nepal calls for enhanced level of support from int’l community