While the WHO is expected to publish the much-anticipated joint report on field studies in Wuhan next week, Liang Wannian, team leader of the Chinese side of the WHO-China joint expert team, talked with the Global Times in an exclusive interview about the next steps in future studies on the origins of the COVID-19, details of the studies, and the major consensus reached by the Chinese and foreign experts. He also responded to questions on why the full report has not been released yet, whether the Chinese and foreign experts have debates over the report, and whether the experts have access to the original data and the exclusion of the hypothesis of a so-called lab leak. 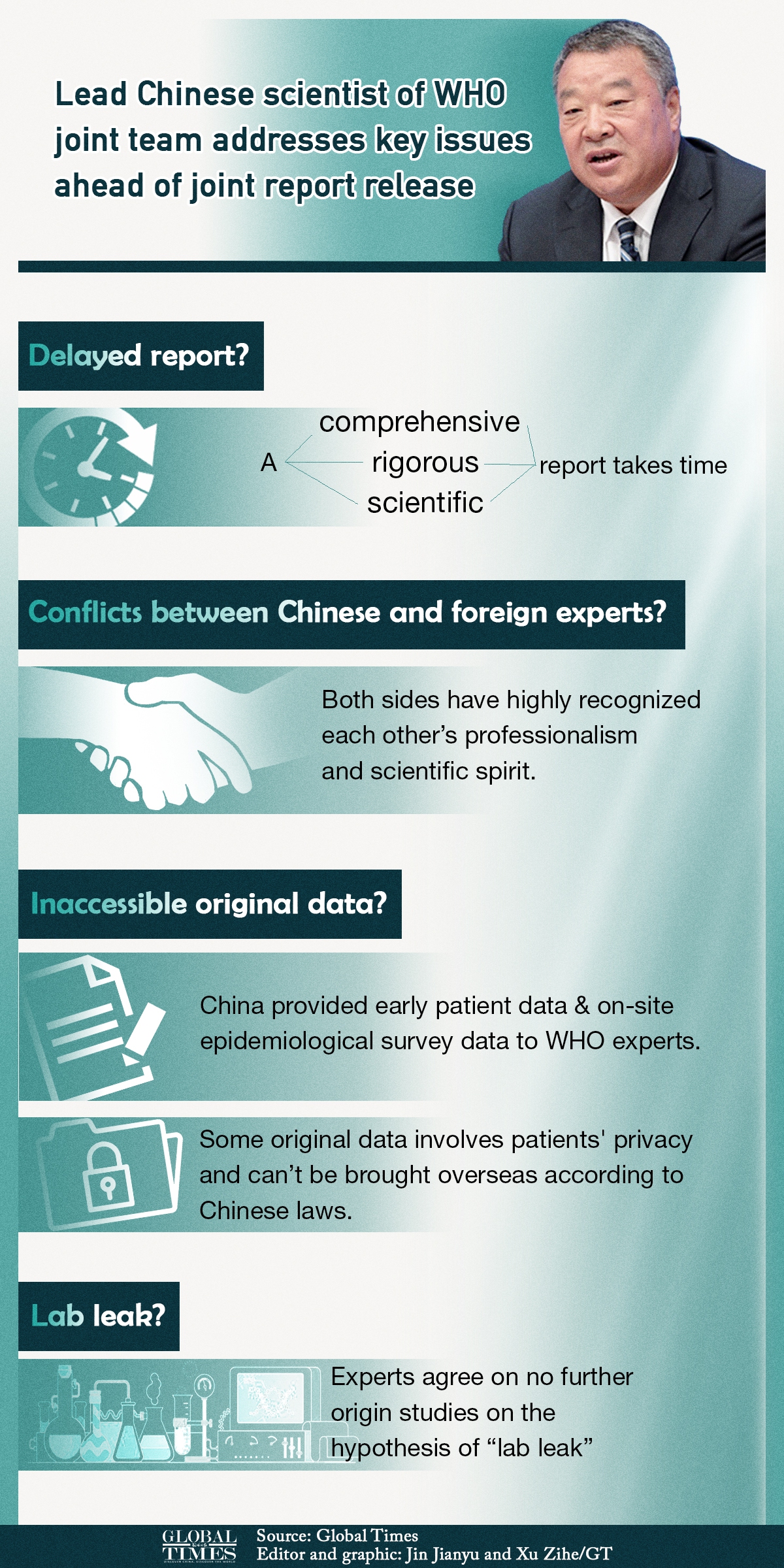 GT: The WHO and China launched a joint study on the origins of SARS-CoV-2 from January 14 to February 10 in Wuhan, Central China’s Hubei Province. As the leader of the Chinese side, how do you feel about this study? Did it achieve the expected goals?

Liang: COVID-19 is the most widespread global pandemic to hit humans in the century. So far, the COVID-19 outbreak remains an unsolved mystery, and the goal for solving that mystery is to prevent future pandemics. The 73rd WHA adopted a resolution on COVID-19 response which clearly pointed out that the purpose of tracing is to prevent animals and humans from being re-infected by the virus, avoid forming new zoonotic hosts, and reduce the greater risk of the emergence and transmission of zoonotic diseases.

As the leader of the Chinese expert team, I have four thoughts on this joint study. First, experts from both sides have adhered to the principles of science and the spirit of openness, and neither has predetermined positions on science. Second, both sides trusted each other, cooperated closely, and communicated openly and fully, so as to jointly promote the China part of the global origins-tracing work. Third, the origins-tracing work had a full schedule, and the field visits were non-stop. All the experts worked very hard. We can say that they have been working day and night. Fourth, the research results of this joint study in China are the consensus of Chinese and foreign experts.

Tracing the origins has never been a simple task and requires long-term joint efforts by scientists. It is hard to expect 30 or so scientists on both sides to give clear answers to all the questions in a month’s time.

Where the novel coronavirus came from, how it infected people, how it spread to Wuhan – these questions still need scientists to continue their research. Through the joint efforts of the WHO-China joint expert team, the two sides reached some important consensus, which made a good start for the global origins-tracing work.

To be specific, the onset date of the earliest case was set at December 8, 2019. Disease surveillance and early case search did not find any earlier cases than that one. Second, the Huanan seafood market played a role in the occurrence and development of the epidemic, and played an important role in the detection of the epidemic. Third, the virus is of natural origin. The most likely transmission route was from the natural host to the intermediate host, and then to humans. Fourth, cold chain transmission, a new mode of transmission, plays an important part in the origin and transmission of the epidemic. Fifth, it is extremely unlikely that the outbreak was caused by a laboratory leak.

GT:  It has been nearly a month after the experts of the China-WHO joint team finished their field studies in China, and the WHO has expressed multiple times that it will soon release the report of the studies but failed to do it. Is this because Chinese experts and international experts disagree on the report or other reasons?

Liang: In this joint study, the joint expert team has established three groups for the origins-tracing work, including epidemiology, animals and environment, and molecular epidemiology. After a month of field studies, Chinese and foreign experts have reached consensus on the main findings, conclusions and recommendations on the basis of joint analysis and discussions. And they released their main findings at a joint press conference on February 9.

These conclusions are the result of repeated scientific discussions by the joint team, reflecting a consensus that is objective, scientific and authoritative. For the moment, Chinese and foreign experts are working on the full study report together. Because it involves a lot of contents, as scientists, we want to present a complete, rigorous and scientific report at the maximum level, so this process takes some time.

Recently, some politicians and the media in the world insisted on politicizing the scientific issue of tracing the source of COVID-19, regardless of scientific facts, for their own personal gain, arbitrarily misinterpreting the scientific findings and reports of our joint team, which is a huge disrespect to the work of our scientists.

Liang: The experts in the work group are from 10 countries with different backgrounds and expertise. But we share one thing in common, that is our identity as scientists makes us adhere to scientific principles and an open spirit. Even though sometimes we have different views on certain issues, which even generate arguments, that is normal discussion of scientific questions. Both sides have highly recognized each other’s professionalism and scientific spirit.

Some of those experts had previously attended international conferences together, but they weren’t familiar with each other. This mission has created deeper ties between them and made them good friends and colleagues. At the beginning of this research, we established principles of “four togetherness,” meaning we make plans together, undertake field work together, draft the report together, and release publications together.

Under those principles and guidance, experts from both sides respected each other, treated each other equally, and completed the joint research together. As for the hyping of the so-called “conflicts,” my foreign colleagues have made clear that they don’t feel that way at all. 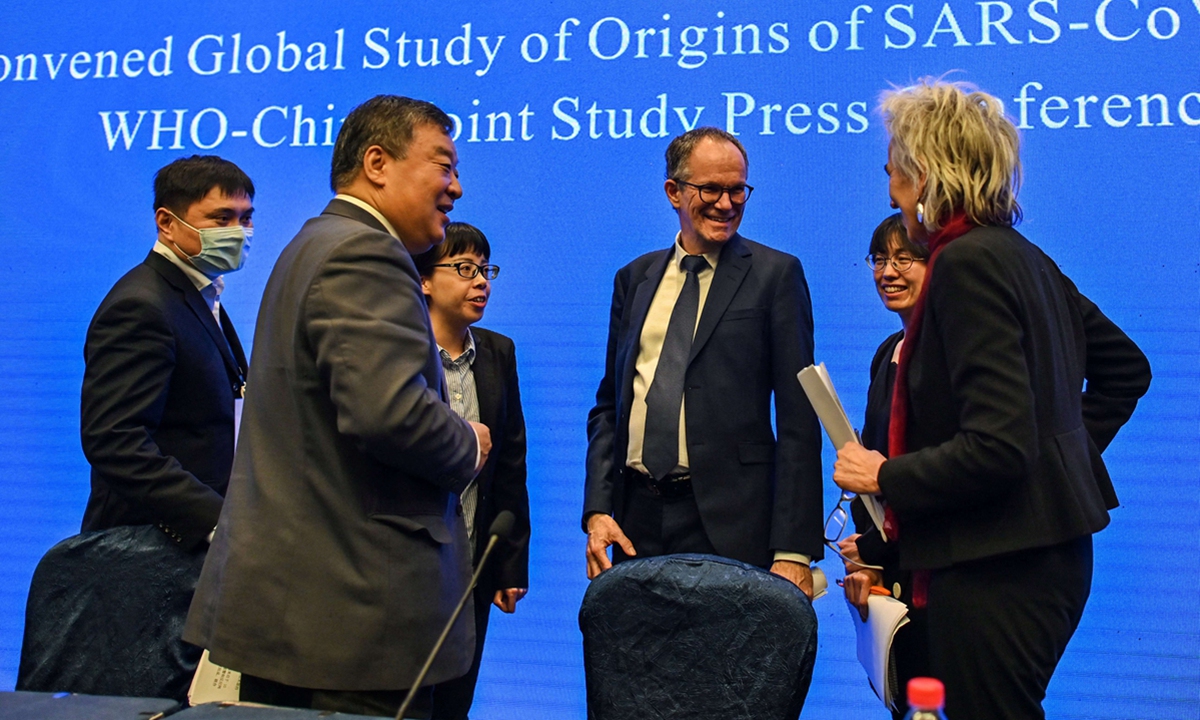 Peter Ben Embarek (center) talks with Liang Wannian (left) and Marion Koopmans (right) after a press conference to wrap up a visit by an international team of experts from the World Health Organization (WHO) in the city of Wuhan, in Central China’s Hubei Province on Tuesday. Photo: AFP

GT: Some countries, such as the US, have said that the joint expert team was subjected to many restrictions in the course of the joint research, unable to access the raw data or the people they wanted to meet. Is that what happened?

Liang: During the joint research, we visited nine organizations including Jinyintan Hospital, Huanan seafood market and the Wuhan Institute of Virology, and talked to the medical staff, laboratory personnel, scientific research personnel, market management and merchants, community workers, recovered patients, families of sacrificed medical staff, as well as ordinary people. These lists were proposed by the foreign experts in the joint expert team. At the beginning of this year, there was some rebound of the epidemic in China, and local governments faced great pressure in the prevention and control of the epidemic. However, the local governments of Wuhan overcame difficulties and did their best to meet the requirements of international experts.

Chinese experts started to collect data in a comprehensive way after Chinese and WHO experts jointly formulated the Terms of Reference (TOR) in July 2020. At the beginning of the joint research work in Wuhan, the joint expert group further clarified the work plan based on the TOR, and determined the valuable data types and data items.

To accomplish the arduous task of scientific cooperation and exchange, the Chinese side congregated relevant institutions and hundreds of scientists and did their best to collect and collate data and conduct preliminary analysis. As for the raw data that requires special attention, the Chinese side showed the WHO experts one by one, such as the early case database and epidemiological survey forms of field use. The Chinese and foreign experts discussed the data analysis methods and phased results, further supplemented and adjusted data analysis framework and re-analyzed the data, and then outputted the results.

As for the original data of some cases, due to the privacy of patients, according to Chinese laws, we cannot let the international experts copy and take it out of the country, which they fully understood.

Lab leak? Experts agree on no further origin studies on the hypothesis of ‘lab leak’

GT: At the press conference held by the joint experts team on February 9, they said it is “extremely unlikely” that the virus leaked from a lab in China. But WHO director-general Tedros Adhanom Ghebreyesus said that all hypotheses are still open in the probe into the coronavirus origins, and require further analysis and study. The statement is seen as the lab theory is not excluded. What’s your opinion on this?

Liang: There are various possibilities for the virus origin. During this joint study, our experts visited Hubei Provincial Center for Disease Control and Prevention, Wuhan Center for Disease Control and Prevention, Wuhan Institute of Virology and other institutes and bio-safety labs. They also had candid, deep communication with experts from those institutions. After their field visits and study, the experts team agreed unanimously that it is extremely unlikely that the virus leaked from the lab. So future virus origins-tracing missions will no longer be focused on this area, unless there is new evidence.

The joint study is an independent scientific research mission, and its conclusion represents the result of the research the joint team conducted. We hope that all sides will uphold a scientific attitude and leave the origins-tracing work to professionals and scientists.

Kathmandu, June 17:Opposition top leaders have called on the government to protect civilians from floods,

Sindhupalchowk June 17: The bodies of two Chinese and one Indian national have been found

Kathmandu June 17 :. Corona virus infection has been confirmed in 2607 people in the

Kathmandu, June 17):The Nepali Congress has said that it would continue its drive to distribute

Jaleshwor, June 17 :A group of dacoits on Wednesday night broke into the house of

Kathmandu, June 17 (RSS): The World Bank’s Board of Executive Directors today approved a $150