Imposing a ban on US investment in 31 companies for a so-called “military link,” denying Taiwan island as part of China… as the hope for a second term quickly fades away, the Trump administration seems to speed up their “crazy” pressure of China and “abominably” squeeze out room for rational bilateral ties in the past two days in the hope of maximizing its negative legacy on Joe Biden, who has been declared the winner of the presidential election, Chinese experts said.

President Donald Trump on Thursday signed an executive order prohibiting American companies and individuals from owning shares in any of 31 Chinese companies listed as enabling the People’s Liberation Army, US media reported.

On the same day, the State Department released an interview of US Secretary of State Mike Pompeo with US media, in which the top US diplomat said “Taiwan has not been a part of China.”

All these moves have been regarded by Chinese analysts as Trump’s and his fellows’, especially Pompeo’s, last-ditch effort to further poison China-US ties, leaving little room for Biden to adjust, and forcing Biden to follow the track of playing tough against China, as well as seeking political gains to impress hawks in the US.

“Biden would not care what kind of the building blocks Trump has put for him. He could blow them down, like what Trump has done to Barack Obama’s legacy,” He Weiwen, a former senior trade official and an executive council member of the China Society for World Trade Organization Studies, told the Global Times on Friday.

“However, in sensitive areas involving civil-military dual-purpose technologies, the US has been hawkish to China for a long time. To what extent the restrictions will be relaxed remains to be seen, and we should not hold an overly optimistic view, such as on Huawei and TikTok,” he said.

“Moreover, American firms and investors would feel the pain if they are forced to give up investing in high-yield Chinese firms which have recovered quickly amid the coronavirus pandemic, with many having reported outstanding earnings over the last quarter,” Gao told the Global Times on Friday. 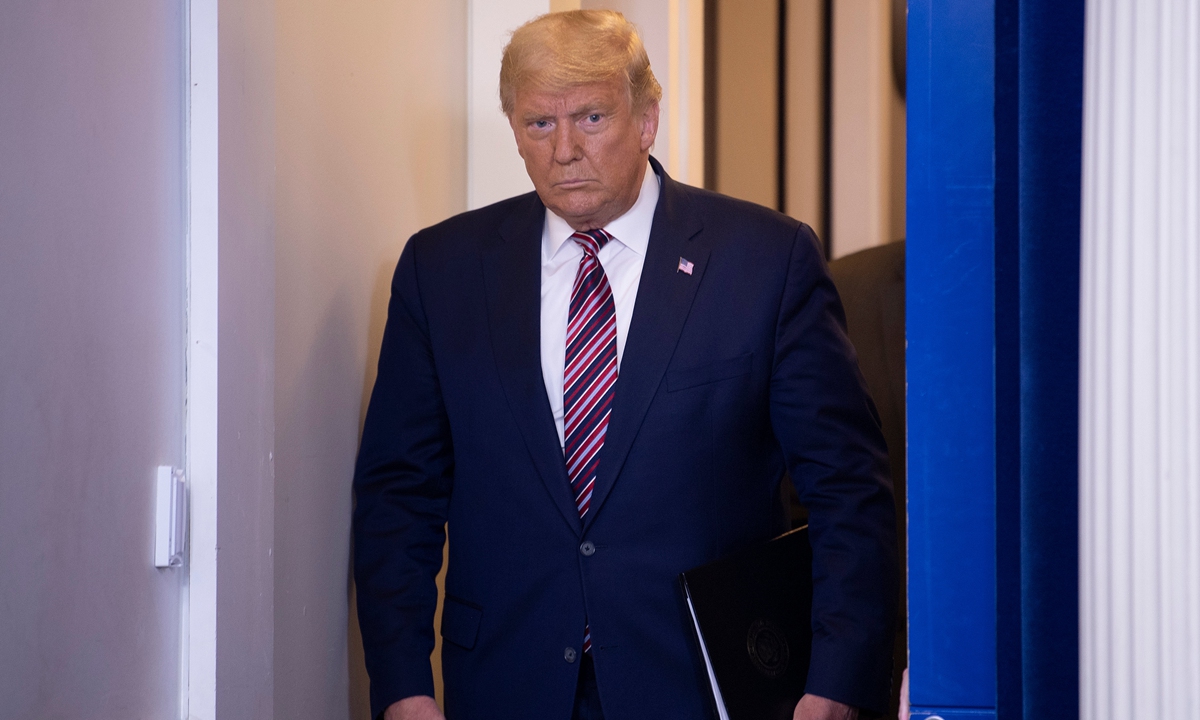 US President Donald Trump arrives to speak in the Brady Briefing Room at the White House, in Washington DC on Thursday. Democrat Joe Biden is leading Trump in the race for the 270 electoral votes as of press time. Photo: AFP

Aside from the Thursday executive order, more negative legacies left by the Trump administration lie in Pompeo’s remarks denying the one-China principle.

Jin Canrong, Associate Dean of the School of International Studies at the Renmin University of China in Beijing, told the Global Times on Friday that Pompeo’s words contradict the US’ commitment to China, and the foundation for the two countries to build formal diplomatic ties.

“What he wants is probably to reinforce the anti-China hawkish image for himself and the Trump administration, and make some trouble for the new administration on China-US ties,” Jin said.

Xin Qiang, deputy director of the Center for US Studies at Fudan University, said that it is unprecedented to see a top US diplomat bluntly challenge the one-China principle, which would lead to severe consequences if more US senior officials follow his narrative.

“There has been less than 70 days for Trump and Pompeo to remain in office, and they are speeding up poisoning China-US ties. If Biden wants to adjust these crazy policies, he may be criticized for kowtowing to China,” Xin said.

The spokesperson also warned people like Pompeo that China would fight back to those who damage its core interests and interfere with its domestic affairs.

Experts noted that the Chinese mainland has been restrained in the face of Pompeo’s provocation, as Pompeo is kidnapping China-US ties for his own political career.

The Chinese Foreign Ministry on Friday extended the country’s congratulations to Joe Biden and Kamala Harris, and said China respects the choice of the Americans. China’s decision to extend congratulations to Biden after Pompeo’s farce also shows that it wants to send a signal to Biden to unfreeze the ties despite current setbacks.

Not surprisingly, the Taiwan authority, led by the separatist Democratic Progressive Party, echoed Pompeo’s remarks. According to Taiwan media, Xavier Chang, spokesperson of the office of Taiwan’s regional leader, said on Friday that they have noticed Pompeo’s remarks and indicated that Taiwan is a “sovereign state,” further inciting Taiwanese separatism.

“The deeds of Pompeo and the Taiwan authority are like adding oil to the fire – further jeopardizing and pushing cross-Straits ties to the brink of military clashes. What they are doing is pushing the independence of Taiwan and trespassing the red line set by the Anti-Secession Law,” Chiu Yi, a former Taiwan legislator and Director of the Taiwan Institute for Economic Research, told the Global Times.

The Taiwan authority will soon use Pompeo’s remarks to fool Taiwan people for so-called support from the US. However, Pompeo is a gatekeeper for the position of secretary of state – facing the destiny of being kicked out in January. And the Taiwan authority “is igniting the blasting fuse of reunification-by-force,” Chiu said.

Chinese mainland analysts said that the Taiwan separatist authority’s stance is pointless and meaningless, and if Biden eventually takes office, the policy of the new US administration will be mature and play by the rules, even if he does still play the Taiwan card.

Pompeo’s troublemaking won’t bring too much pressure or impact to the new administration, and Biden won’t let such a horrible politician ruin his policymaking, Jin said.

At this moment, for the Chinese mainland, in order to respond to Pompeo’s wrong and provocative remarks, refutation is necessary, but for action, “we can just stick to what we are doing now to strengthen all capabilities for realizing reunification, and to prepare for any situation,” Jin noted.

– The U.S. Justice Department is investigating a potential crime related to funneling money to the White House in exchange for a presidential pardon, according

U.S. vaccine plans take shape but no let-up on restrictions

Pauline Hanson, leader of Australia’s far-right party One Nation, on Monday called for Australians to

Five killed, including baby, as car ploughs into pedestrian zone in Germany

BERLIN, Dec 2 – Five people including a nine-month-old baby were killed and up to

NEW YORK, Dec 2 – A lawyer for Donald Trump on Tuesday urged a federal

– The U.S. Justice Department is investigating a potential crime related to funneling money to

Kathmandu, Dec 1  Minister for Home Affairs Ram BhadaurThapa has pointed out the need to

Mahottari, Dec 1 Minister for Health and Population, Bhanu Bhakta Dhakal, has said that the

Kathmandu, Dec 1 Flights between Nepal and India which were halted over the risk of