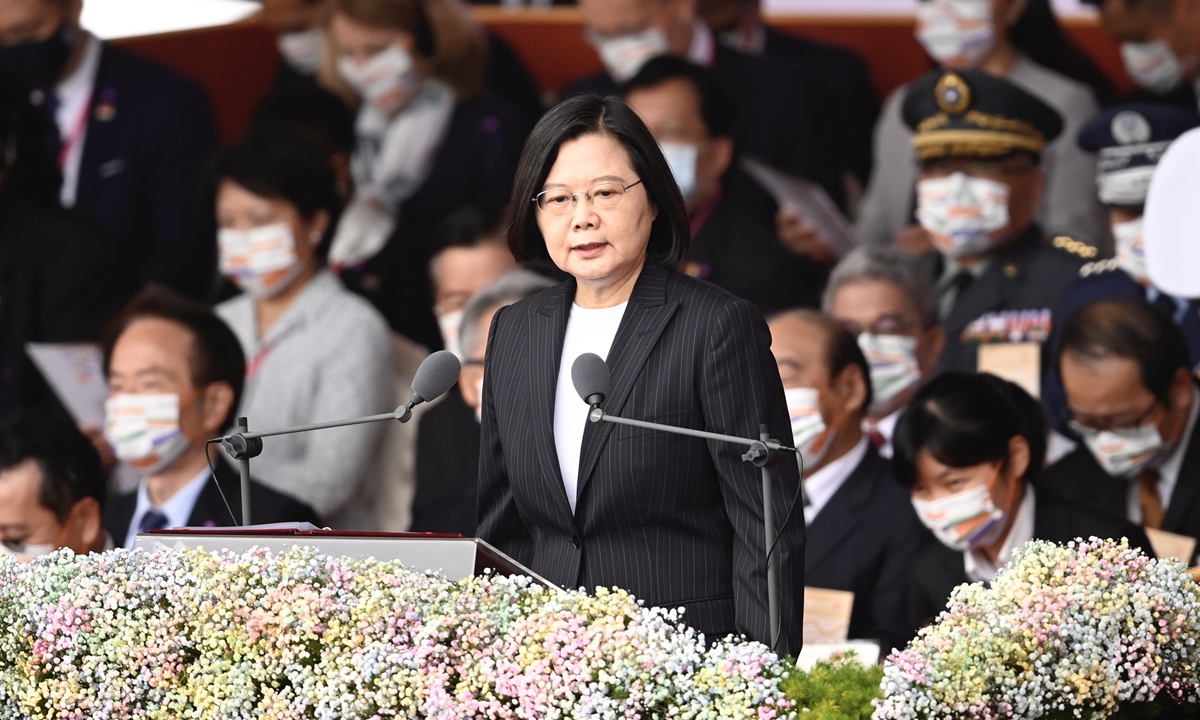 Taiwan regional leader Tsai Ing-wen’s “Double Ten” (October 10) address on Saturday is widely considered to have shown her softest tone on cross-Straits ties in recent years. She said “we will not act rashly… We are committed to upholding cross-Straits stability.” In addition, she stressed that “we are willing to work together to facilitate meaningful [cross-Straits] dialogue.”

It is obviously a tactic Tsai chose to soften her tone in the speech. The situation across the Taiwan Straits has been seriously deteriorating. The Chinese People’s Liberation Army has carried out a series of intensive combat exercises as a clear warning against moves from forces which seeks “secession.” Due to provocation from the Tsai authorities, the risk of war is rising sharply, and Tsai authorities are standing at the precipice.

At this critical juncture, the US has been skirting the issue, and it did not offer Tsai authorities even an empty promise to defend the island. On the one hand, it claims without sincerity that it will “fulfill its commitments” to the island of Taiwan under the Taiwan Relations Act. On the other, it noted that the Chinese mainland does have the determination to deter “Taiwan secession” by force. On Wednesday, US National Security Advisor Robert O’Brien suggested that Taiwan should “turn themselves into a porcupine” as “lions generally don’t like to eat porcupines” in his latest speech.

In the rare display of strength and determination among the three sides, the Chinese mainland has clearly gained the upper hand. It is making full combat-level preparations for possible military conflict to strike Taiwan secessionist forces. It is not just a bluff. Democratic Progressive Party (DPP) authorities are under unprecedented pressure, and Washington is now aware of the seriousness of the situation.

Tsai was forced to soften her tone. The agenda of her and the DPP over seeking “secession” has hit the dead end of the Anti-Secession Law. But we should never assume their attitude will change. Tsai authorities won the election by their radical route, and now some members of the Kuomintang are imitating the DPP’s moves. It is impossible that the DPP will make a big switch in its policy.

Tsai’s so-called dialogue is based on the “two states” theory. What we want is a peaceful reunification while they want a peaceful secession. As tensions escalate, she is utilizing the idea of facilitating dialogue as an “olive branch” as a delaying tactic, attempting to deceive the international community for sympathy.

After assuming office, the DPP has been taking advantage of its power to push for “de-Sinicization” in all fields of the island. Since the Trump administration came into power, they have been fully coordinating with the new policy of the US to contain the Chinese mainland and stand on the frontline of the US’ Indo-Pacific Strategy. Tsai authorities have turned completely hostile toward the Chinese mainland, and this issue can no longer be resolved through dialogue. The malevolent force might have to be subdued through military means.

Tsai and the DPP authorities will not deceive the world with their soft rhetoric. If they really want to facilitate “meaningful dialogue” between the two sides, there is only one possibility – returning to the 1992 Consensus and recognizing the one-China principle. This was the political basis for the peaceful situation of cross-Straits ties for eight years before the DPP came to power. Tsai authorities destroyed it and are trying to replace it with empty talk. Their attempt will never succeed.

Time will tell that the “Taiwan secessionist” forces will not benefit the Taiwan people, but will gradually suffocate Taiwan society. The Tsai authorities not only seek “secession,” but also act as an accomplice of the US in the latter’s strategic suppression against China. They will eventually pay a heavy price for it.

Russia ready to freeze nuclear warheads along with U.S. to extend arms treaty

OSCOW, Oct. 20 — Russia is ready to freeze the existing number of nuclear warheads along with the United States to extend the bilateral New

Johnson beats Cilic in first round of Cologne Championships

Reframing America’s Role in the World

“Jews and Arabs are descendants of one common ancestor, Avraham,” Netanyahu said in his welcoming

Russia ready to freeze nuclear warheads along with U.S. to extend arms treaty

OSCOW, Oct. 20 — Russia is ready to freeze the existing number of nuclear warheads

Lockdown has ended, but virus still there; All must be cautious during festivities: PM

New Delhi, Oct 20 With the onset of the festival season, Prime Minister Narendra Modi on

Coronavirus: Latest updates on COVID-19 crisis around the world

New Delhi, Oct 20 Here are the latest updates on the coronavirus crisis in India

The Taliban are advancing while peace talks stall. What are the chances for peace once

Countries to find US telecoms promises are bounced checks

In order to further assault Chinese telecom producers Huawei and ZTE, the US has come