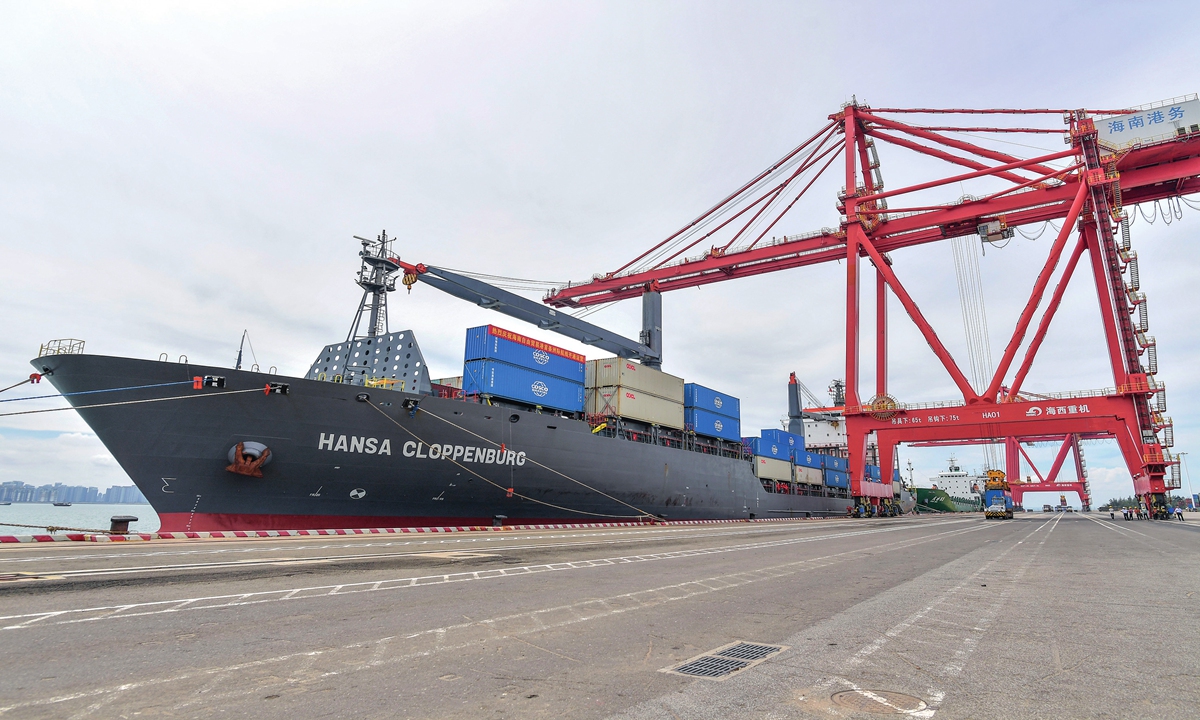 A container ship that operates the Hainan free trade port’s first intercontinental route is seen calling at the Xiaochantan dock of Yangpu port. The route linking the Xiaochantan wharf, the South Pacific and Australia, officially begin operations on Monday, filling a gap in Hainan’s shipping links with the Philippines, Papua New Guinea and Australia. Photo: cnsphoto

When a sudden coronavirus outbreak almost halted the Chinese economy late January, few people expected the “normal day” could come so soon. China’s GDP is estimated to grow above 5 percent in the third quarter of the year, and a much faster pace in the fourth quarter. It’s a sign that the world’s second-largest economy is further back on track while others were still in trouble, according to economists and agencies ahead of an official announcement on Monday of third quarter economic figures.

Economic figures have seen better-than-expected performance in recent months: China’s imports grew at their fastest pace this year in September, far above expectations, while exports continued to expand.

China’s retail sales resumed growth in August for the first time in 2020. The country’s official manufacturing PMI rose to 51.5 in September from 51 in August, continuing a seven-month growth trend.

“With a slew of positive economic figures, we expect the third-quarter GDP to grow by more than 5 percent year-on-year, from a steady growth of 3.2 percent in the second quarter. That means the Chinese economy is back to normal,” Liu Xuezhi, an economist at the Bank of Communications, told the Global Times on Friday.

Liu’s forecast was echoed by his foreign counterparts. Japanese financial services group Nomura made a similar observation in a September report sent to the Global Times, in which it sees China’s real GDP growth at 5.2 percent in the third quarter.

A report from Zhixin Investment Research Institute believes China’s GDP will grow by 6 percent in the third quarter, and 7 percent in the fourth quarter, with full-year growth of between 2.7 percent to 3.3 percent.

“A V-shape rebound of the Chinese economy is becoming clearer, as investment, industry, consumption and exports have powered the country’s economic recovery,” the institute said in a report sent to the Global Times on Friday.

“China’s GDP has already bounced back to pre-pandemic levels,” Brian Coulton, chief economist at Fitch Ratings, said in a report sent to the Global Times.

The rapid recovery is making China the only major economy with positive growth in 2020, as its GDP is predicted to expand 1.9 percent, and a driving force in the world when many were still stuck in the pandemic, according to the latest economic outlook released by the International Monetary Fund (IMF) on Tuesday.

The expected GDP data coming out of China also highlighted the initial success of China’s nuanced approach in handling the pandemic and restarting its economy, which stands in stark contrast to that of the US, where officials still appear more prone to finger-pointing and reopening the economy prematurely without effective measures to stop the virus, analysts noted. 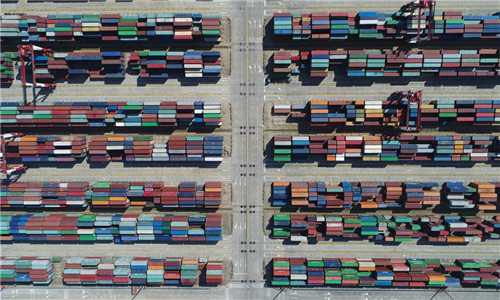 Aerial photo taken on April 23, 2017 shows a container wharf of Yangshan Port in Shanghai, east China. Yangshan Port is China’s first port built on islands. Shanghai, one of the most important cities in east China, has contrainer trade with more than 500 ports of 214 countries and regions. In 2016, Shanghai port has kept standing at No. 1 in container throughput in the world for seven years in a row. (Xinhua/Ding Ting)

Nevertheless, the initial success did not come easy, especially in the eyes of those who have been through the difficulties of the past nine months.

“The figures are encouraging, but they can never tell how we got here,” Serena Chen, sales manager of a Guangzhou-based company that engages in home appliance exports, told the Global Times on Friday.

“No one knows what will come and what to do when production halted, workers were grounded, and logistics were blocked. We were panicking, struggling to pick up production, and striving to find a way out,” Chen said, noting that the firm’s exports plunged by 60 percent from February to April.

Chen’s views were shared by other traders in the country, which is dubbed as the world’s factory. In the first quarter of 2020, China’s foreign trade in goods was down 6.4 percent, with exports falling by 11.4 percent, and imports dropping by 0.7 percent.

China’s GDP contracted by 6.8 percent in the first quarter this year, the first decline since 1992, when quarterly records were first taken. By then, some economists and agencies were wondering whether China could emerge from the chaos and renew its economic miracle, with some even predicting a full-year negative GDP growth, which would need years to recover.

“The turning point came after the government’s intervention in virus containment, fast work resumption, and policy support from local authorities. But when production was restored, overseas demand dropped due to pandemic and forced us, an exporter, to focus on the domestic market,” Chen said.

Zhang Hongsheng, general manager at a textile firm based in Nantong, East China’s Jiangsu Province, said the second quarter has been a good one, as global demand for masks and medical protective supplies surged. Zhang’s firm was a clothing manufacturer, but turned into a mask maker.

Although the country also faced spikes of the virus in Northeast China in May and in Beijing in June, China still reported a 3.2 percent growth in the second quarter – beating analysts’ expectations and rebounding from the first quarter’s huge contraction.

Chen and Zhang are turning their focus to the vast domestic market. “I have to put my eggs in separate baskets, though turning to the domestic market still faces problems, such as a different certificate system, and sometimes a total redesign,” Chen said, noting that for a small company like hers, the cost of transforming would be huge.

“But the prospects of a domestic market are promising,” Chen added.

China’s top leadership also floated a new economic development pattern of “dual circulation,” which means taking the domestic market as the mainstay, while letting internal and external markets boost each other in the face of rising global uncertainties.

If a second quarter rebound was largely due to the country’s fast work resumption efforts and policy stimulus, the third and fourth quarters will be greatly driven by the rebound in the vast domestic consumption market, analysts said, noting that to fully unleash consumption potential, more policies have to be launched from the central government to local authorities.

“The country’s small and medium-sized firms and the service sector still need more attention and policy support to help them get through,” Liu said.

Confidence ahead of risks

Looking ahead, Chinese experts said the biggest risks to China’s economic recovery still largely lie in the uncertainties in the global pandemic situation, while people in the country and the world have been more confident in China’s role of leading the world’s economic recovery.

China was pulling up global numbers, and without China, “cumulative growth for 2020 and 2021 would be negative,” said IMF Chief Economist Gita Gopinath on Wednesday.

“The biggest uncertainty facing the current global economic operation, as well as China’s, comes from any black swan in the US election,” said Lian Ping, head of Zhixin Investment Research Institute.

Coronavirus cases around the world have climbed to all-time highs of more than 330,000 per day, as the scourge have stormed back across Europe, and has spread with renewed speed in the US, forcing many places to reimpose tough restrictions eased just months ago.

The IMF predicts the US economy will contract by 4.3 percent this year, and Britain’s economy by 9.8 percent. Japan’s economy is forecast to decline by 5.3 percent.

Analysts noted consumption confidence will be the major factor to uphold China amid global uncertainties. Wei Jianguo, a former Chinese vice minister of commerce and executive deputy director of the China Center for International Economic Exchanges, told the Global Times that in the Chinese market in 2020, consumption will be the biggest driving force of economic growth.

“I feel OK to plan my future trips in the country, and feel assured to eat outside and hang out with my friends since I believe it’s safe with our strict measures in pandemic control,” Zhao Liying, a Beijing-based white-collar worker, told the Global Times on Friday.

Tourist attractions across China received 637 million visits during the National Day and Mid-Autumn Festival holidays from October 1 to 8, or 79 percent of the visits made during the same holiday last year. Tourism revenue reached 466.56 billion yuan, a recovery of 69.9 percent of the revenue in the same period in 2019.

“As consumption confidence returns in the country, we expect the domestic tourism industry to be normal by February 2021,” Li Baolun, a tourism industry player, told the Global Times on Friday.

China is moving forward amid headwinds, as it always does, Liu said, expecting that a key meeting in late October that will determine China’s development path in the next five years might inject fresh momentum to world economic recovery.

The widening breach between Beijing and London

– Global Impact newsletter we look at the recent rapid deterioration in the historically complex China-UK relationship and what it portends for the future. In

In final days of campaign, Trump criticizes those fighting coronavirus

WASHINGTON, Oct 31 – President Donald Trump is spending the closing days of his re-election

The great divergence: U.S. COVID-19 economy has delivered luxury houses for some, evictions for others

(Reuters) – When the temperature dipped near freezing in Columbus, Ohio in mid-October, the children

ZURICH – Austria’s daily tally of new coronavirus cases stood at 5,349, data from the

The widening breach between Beijing and London

Make a Plan to Resist

The Campus Thought Police: Faux Outrage, Intimidation, and the Threat to Free Speech

There’s a long history of faux outrage in reactionary U.S. media regarding the alleged threat of “leftist