Chinese COVID-19 vaccine developers have stressed the safety of both inactivated vaccines and a recombinant adenovirus vector vaccine, after global trials of a coronavirus vaccine developed by AstraZeneca and Oxford University paused after a volunteer fell ill during trials, with one Chinese developer saying that some 100,000 people vaccinated have shown no abnormal reactions.

Chinese health experts believe it once again proves that China’s COVID-19 vaccines were safe, which was a strong response to some Western countries’ slander on the quality and safety of Chinese vaccines. China, which is taking the lead in developing COVID-19 vaccines, set a good example for the world in turning the passive prevention and control into an active one, analysts said.

The China National Biotec Group (CNBG), a Chinese COVID-19 vaccine developer, announced that more than 100,000 vaccinations have been given, and none of the people who received two inactivated vaccines it developed have shown adverse reactions, with none contracting COVID-19.

China has approved three vaccines for urgent use, and two of them were developed by the CNBG. Their vaccines have been given to high-risk groups, such as medical staff, diplomats sent to most-affected countries, and employees sent overseas under the Belt and Road Initiative. These people have stayed abroad several months after being vaccinated, Zhou Song, CNBG’s general counsel, said, according to the WeChat account of the State-owned Assets Supervision and Administration Commission of the State Council. 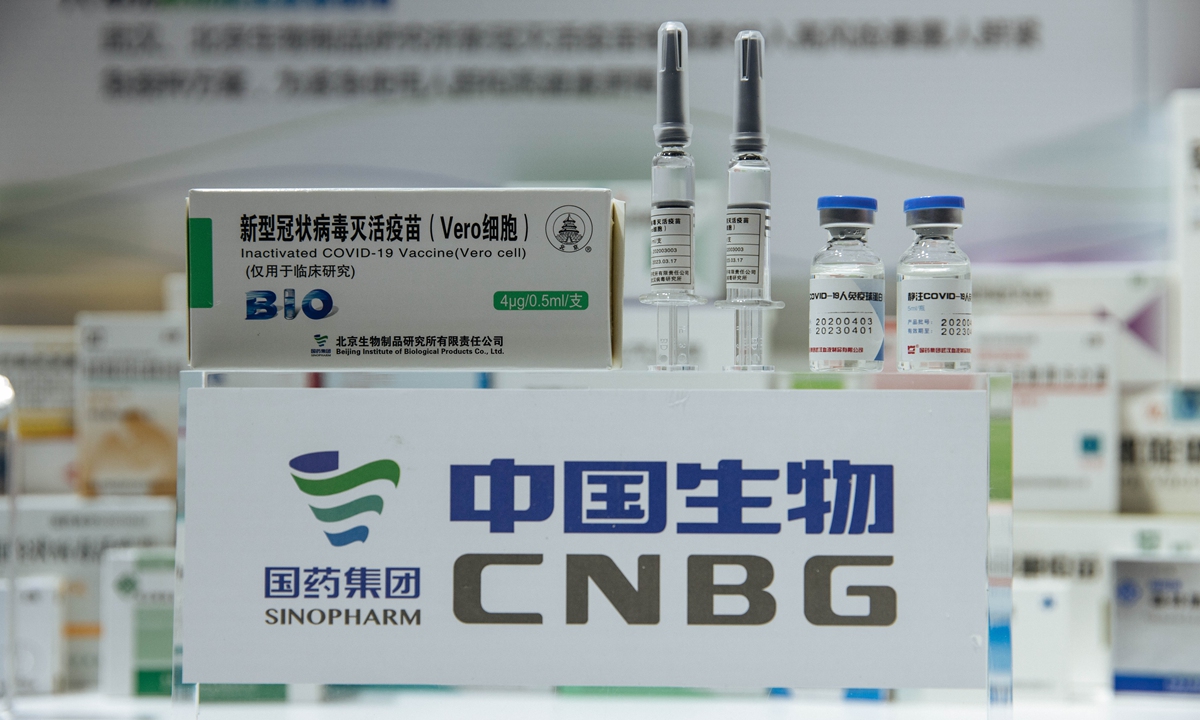 There were examples that some employees who stayed aboard during the epidemic were infected with the virus, but not those who were sent recently after vaccination, Zhou said.

These cases have occurred in several countries, and none of the tens of thousands of people sent aboard after being given the vaccine were infected with the virus, which proves the effectiveness of the vaccines, Zhou said.

Chief scientific officer of another Chinese vaccine developer, CanSino Biologics, also stressed the safety of their recombinant adenovirus vector vaccine, despite using a similar mechanism with the AstraZeneca/Oxford vaccine.

One difference is that CanSino Biologics’ vaccine uses adenovirus that exists in human bodies, while the AstraZeneca/Oxford candidate vaccine uses chimpanzee adenovirus. The latter may trigger a rejection in the human immune system, the paper.cn reported.

Yang Zhanqiu, deputy director of the pathogen biology department at Wuhan University, told the Global Times on Friday that the vaccines injected to the Chinese recipients have all passed two phases of clinical trials, and the results of phase one clinical trials that focused on the toxic effects revealed their non-toxicity.

The news that none of the vaccinated people showed abnormal reactions once again proved the safety and effectiveness of Chinese vaccines, Yang said, which served as hard evidence in response to some Western countries’ doubts about Chinese vaccines.

A Fortune article published on Monday questioned China’s moves in vaccinating high-risk groups for emergency use before all clinical trials are completed as “troubling methods” and aimed at “reaching the finish line first” in the global vaccine race.

An employee at a Chinese state-owned company’s branch in Uganda told the Global Times on Friday that he was vaccinated in August, and has experienced no discomfort or abnormal symptoms.

His vaccination certificate showed the inactivated COVID-19 vaccine was manufactured by Beijing Institute of Biological Products.

The employee, surnamed Wang, said he was told that three chartered planes have been arranged by the Chinese government for September and October, and that he will be sent to Uganda.

“We are returning to Uganda to replace my colleagues there, so that they can reunite with their families. Having the vaccine made me and my family feel more at ease and safe, and we are confident in China’s vaccine!” Wang said. 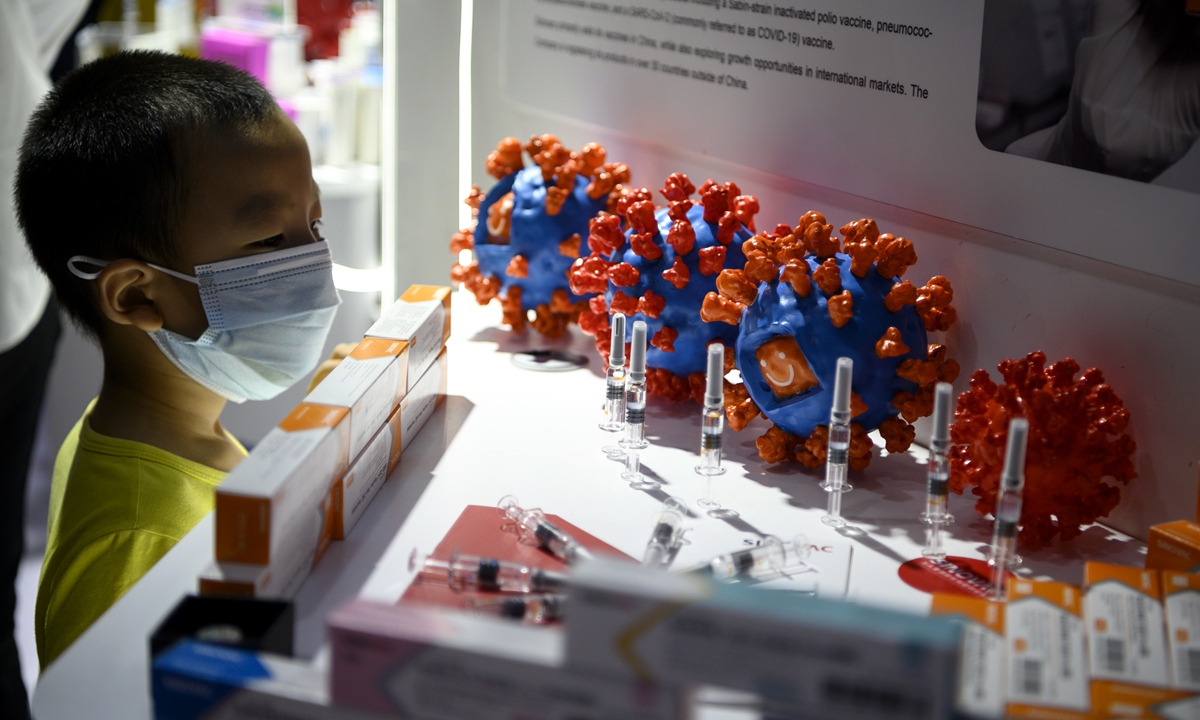 A boy looks at Sinovac Biotech LTD’s vaccine candidate for COVID-19 on display at the China International Fair for Trade in Services (CIFTIS) in Beijing on Sunday. Photo: AFP

Tao Lina, a Shanghai-based vaccine expert, told the Global Times on Friday that the halt in trials of the AstraZeneca/Oxford vaccine does not necessarily mean that its vaccine was not safe, as the mechanism and techniques of the COVID-19 vaccines were all similar worldwide, and their safety level was basically the same.

Yang said the possibility of a few abnormal reactions such as fever and swelling is very likely after the vaccines hit the market, as all vaccines will produce a certain percentage of adverse reactions.

However, there is still no answer on how long the vaccines will protect people. Zhou said the possibility of a lifelong immunity from the virus after taking the vaccine is very slim, and current experiments show that it may provide protection for one to three years.

After the pause in the AstraZeneca/Oxford vaccine made headlines, the investor of a Russian COVID-19 vaccine also highlighted the safety of their vaccine.

RDIF recently announced a deal to supply 32 million doses of the Sputnik V vaccine to Mexico, with the earliest delivery expected in November.

However, most countries in Europe or the US have only developed one route, and it’s not enough, especially amid the rebound of the coronavirus globally, Yang said, adding that they should learn from China, which has set a good example, as the country turned from passive response to an active move in the battle against COVID-19.

As the US and India continued to take the lead in the number of confirmed COVID-19 cases globally, countries in Europe also showed a resurgence of the virus.

On Thursday, France and Spain both reported their highest daily increase in COVID-19 cases of 9,843 and 10,764, respectively.

The number of confirmed cases is also surging in the Czech Republic, setting a record for the second time this week on Thursday, forcing the country to return to the mandatory wearing of face masks in closed spaces.

Cabinet has only five members, while Bishnu Poudel is still the Deputy Prime Minister

Kathmandu, : The Council of Ministers has become five-member after the Supreme Court annulled the

Oli’s vacate petition: Supreme Court orders to pull both sides to revoke the interim order or not.

Kathmandu, 8 August. The Supreme Court has ordered four lawmakers from Karnali who violated the

3 killed in shooting in U.S. Colorado

Voices raised for conservation of indigenous breed of cow

Kathmandu, June 22:Voices have been raised for preserving the indigenous breed of cow, which is

Itahari, June 22: Suraj Bishwakarma, 25, was mulling to fly abroad for job as migrant

Constitution would be taken ahead on right track: Maoist Centre Chair Dahal