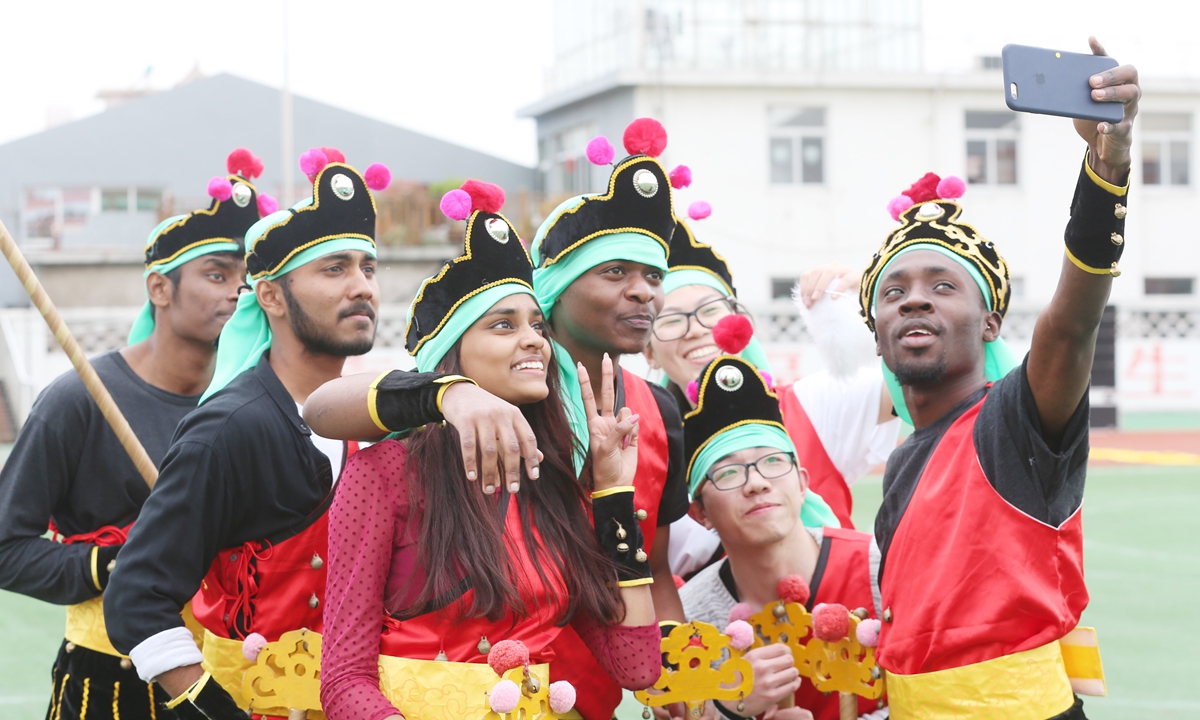 Indian students take a selfie with other schoolmates in a Chinese univeristy Photo: IC

India’s education ministry decided to review the establishment of China’s Confucius institutes in association with seven local colleges and universities after intelligence agencies raised security concerns over cooperation, the Hindustan Times reported on Sunday. Some regard the decision as Indian government extending the tension into the education sector in wake of recent border clashes with China.

The move sparked concerns Indian enthusiasts for Chinese culture will bear the brunt of a potential cultural decoupling.

India’s National Education Policy (NEP) has also not included Putonghua on the list of examples of foreign languages schools can offer to students, media reported on Sunday. Putonghua is the standard Chinese language.

Confucius institutes have been one of the most diversified Chinese language teaching partnerships connecting universities and educational institutes in China with their global partners.Around 20 Indian universities have offered Chinese language courses and eight universities provide programs on Chinese studies to local students as of the end of 2018, according to data released by the Chinese Embassy in India in the year. About 2,000 Indian students registered in Chinese studies and around 20,000 Indian learned Chinese in 2018.

The Confucius institutes also award scholarships to Indian students interested in visiting and studying in China.

Most of the students at the Chinese language schools in India are Indian businesspeople, teachers, translators and tourism professionals, and many young people see promising opportunities from learning Chinese, a Chinese language expert based in Mumbai who prefers to be anonymous told the Global Times.

Many Indians who can speak Chinese have benefited greatly from trade between China and India, but now they are facing more uncertainty, he said.

Haate said the institute not only taught them the language, but also the culture, and would introduce local Chinese families to the students. On Spring Festivals, they would visit Kwan Kung Tai Shek, a Chinese temple in Mumbai and enjoy the lion dance performed by local Chinese community. 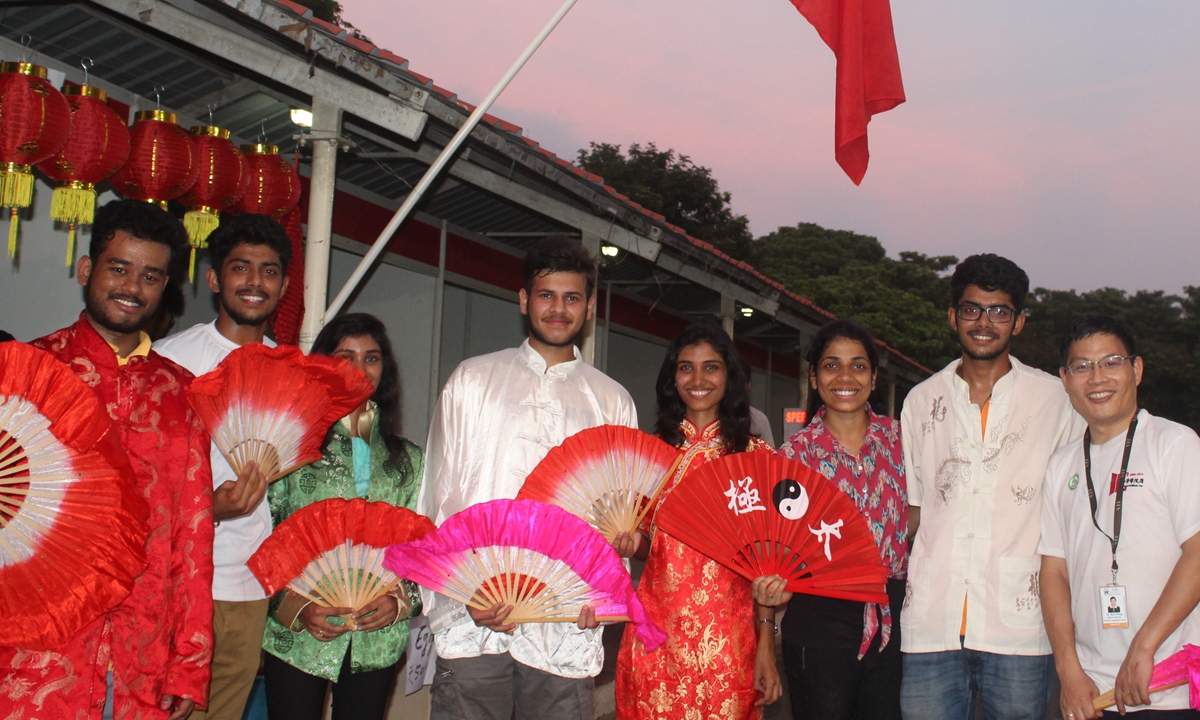 “I hate military conflicts,” said Haate, referencing ongoing diplomatic tensions with China and India. “I will only hope and pray that institutes like the Confucius Institute should not be affected by these tensions as it will allow us both countries to come closer by exchanging cultural activities!”Globally, there are at least 550 Confucius institutes and 1,172 Confucius classrooms at primary and high schools in 162 countries and regions as of 2019. More than 100 million people are learning Chinese globally, with many countries – including Haiti, the Central African Republic, Chad, and Maldives – applying to join for the first time in 2019.

The Chinese Embassy in India on Tuesday urged the Indian side to avoid politicizing normal cooperation and maintain the healthy development of cultural exchanges between the two countries.

All Confucius institutes were established by Chinese and Indian universities after signing legally binding cooperation agreements on a mutual basis with friendly consultation, as well as voluntary initiative from the Indian side to meet the conditions for running the institute, said the spokesperson of the Chinese Embassy in India, Counselor Ji Rong in the statement.

The University of Mumbai, which set up its Confucius Institute in 2013, told the Global Times on Wednesday that “as of now there is status quo,” and they continue to do their academic work at the university.

Other universities including the Vellore Institute of Technology, which started a Chinese Language Centre in 2009, did not respond upon the Global Times’ request as of press time.

Observers suggested India’s so-called “security concerns” are clearly influenced by Western countries who are using a full-court press to contain China, including smearing the Confucius institutes. 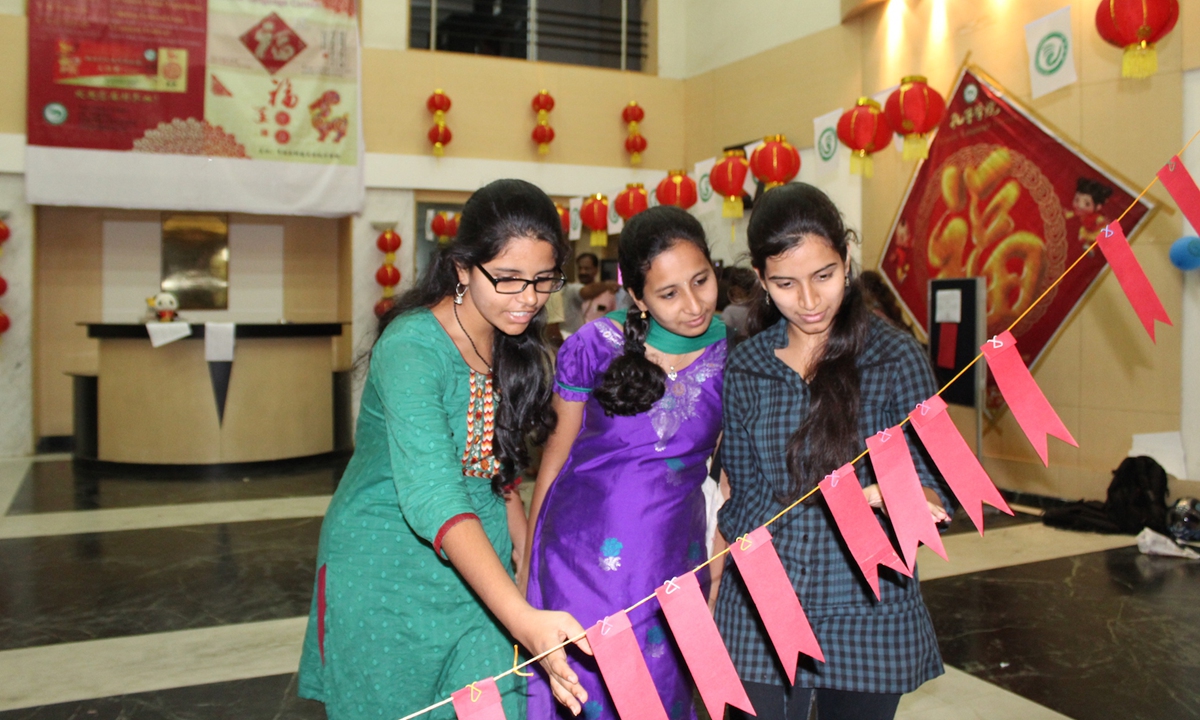 Indian students attend Chinese cultural events at the Confucius Institute in the VIT University of India. Photo: Confucius Institute in the VIT University
It’s an obvious tendency India is moving closer to the US strategically, Qian Feng, director of the research department at the National Strategy Institute at Tsinghua University, told the Global Times. “Some anti-China forces in India are clamoring to decouple the Indian economy from China’s. Reviewing education cooperation programs is equivalent to seeking a cultural decoupling. It’s an ever worsening trend.”

However, some experts suggested the educational ministry’s move should not cause undue concern, as the possibility of a total ban on Chinese language learning in India is very low and will not profoundly affect Indians’ enthusiasm for Chinese.

“It’s not clear what the removal of the status for Chinese language [at schools] mean as it is being taught and used regardless of relations with China. Hundreds of graduates are churned out every year,” Srikanth Kondapalli, a Professor in Chinese Studies at Jawaharlal Nehru University, told the Global Times.

“We have a number of overseas Chinese tourists from Singapore who need Chinese language interpreters… In the public service exams, Chinese language is an optional test and many Indians are learning Chinese,” said Kondapalli.

Kathmandu: In the last 24 hours, 2,309 people have been infected with the corona virus

AHRWEILER, Germany (AP) — Like other residents of his town in Germany, Wolfgang Huste knew