Rampant US epidemic to hurt the world: Global Times 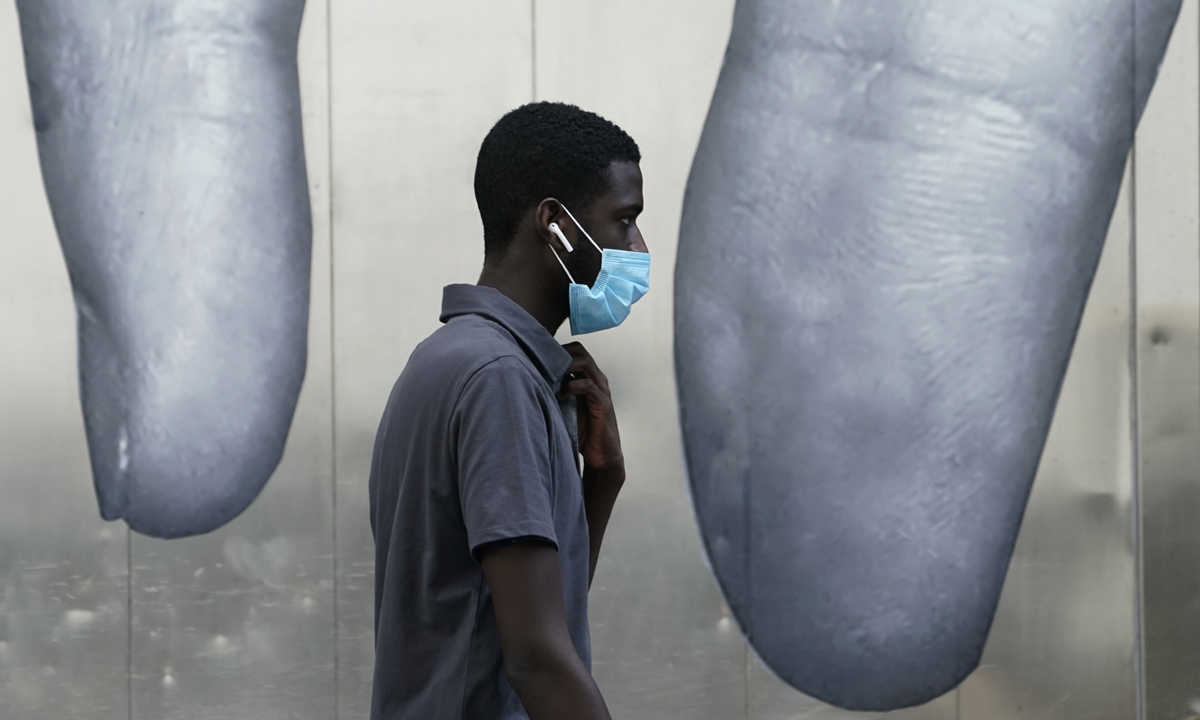 A man wearing a mask passes a mural on the side of a building in midtown New York City on June 26, 2020. Photo: AFP

The US set another record for novel coronavirus cases on Thursday. Reuters reported that the country confirmed more than 55,000 new COVID-19 cases that day, which is “a new daily global record” for the pandemic.

Earlier this week, US epidemiologist Dr. Anthony Fauci warned that the US may soon see as many as 100,000 new cases of COVID-19 a day if the current trajectory of the outbreak is not changed.

Scott Gottlieb, a former commissioner for the US Food and Drug Administration, even suggested the true number of US daily infections is between 400,000 and 500,000, though there is not enough testing to find them all.

The current epidemic in the US is completely out of control. However, the US federal government still insists that the rapid increase in infection figures is due to more testing. Data released by the US Labor Department on Thursday showed the country added 4.8 million jobs in June. The White House soon boasted about its economic achievements. But people doubt whether the US government is making utmost efforts to rein in the virus and save more American lives.

Lies are dominating US society’s recognition of the epidemic. Political parties have put their interests in campaigning in the first place, which has distorted the society’s attention and allocation of resources. The US fight against the virus is paralyzed. There is no national strategy to alleviate the epidemic. Political calculations have stunted the battle against COVID-19.

Americans are not willing to temporarily sacrifice their freedom for the fight against the virus. The federal government has not corrected the attitude. Worse, it used the sentiment to promote the resumption of economic activities in a risky manner. It is making ordinary people responsible for the out-of-control epidemic.

The US economy has slightly recovered, yet the price it is paying is too high. It will surely become a burden for the US’ future economic development. The US government’s approach seems to be shaping US society’s greater tolerance toward the virus, making people less afraid of being infected.

As the only superpower, the US can shape global public opinion as it wishes. The country has manipulated the understanding over the novel coronavirus in many societies worldwide. It has not contributed to the global fight against the crisis. On the contrary, it is setting a terrible example.

No matter how the virus surfaced, the US plays the most negative role in making sure the novel coronavirus spreads fast across the globe, and we are far from ending it.

Can anyone in the world recall of outstanding contributions the US has made to the global efforts against COVID-19? The only thing people can remember is the US’ repeated accusations against China, apart from its astonishingly large number of infections and deaths. Washington has distracted the world’s attention.

The US is supposed to lead the world in establishing a global anti-pandemic front. But it continued to criticize the World Health Organization (WHO), and announced it would sever ties with the body.

As long as its epidemic continues to spread, the global anti-virus fight can hardly take a fundamental turn for the better.

In the coming fall and winter, the US epidemic will likely run rampant, and more countries and regions will be forced to suffer because of the US.