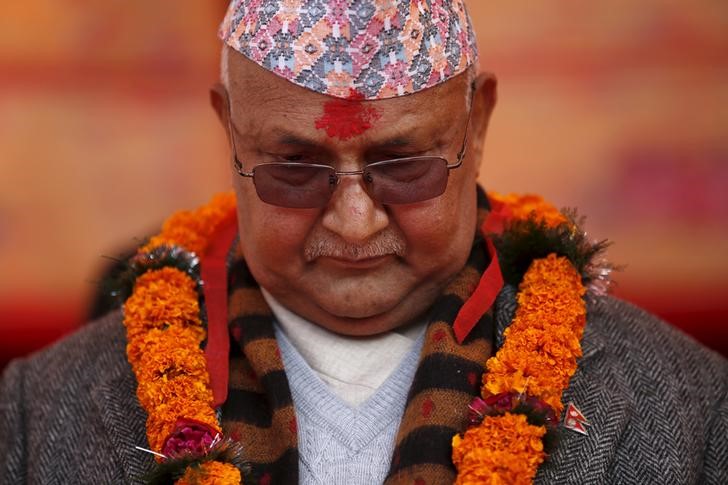 Kathmandu 5 July :  A crucial meeting of Nepal’s ruling communist party to decide the political future of embattled Prime Minister K.P. Sharma Oli was postponed until Monday to allow more time for the top leadership to iron out their differences over his style of functioning and anti-India statements.

The meeting of the Nepal Communist Party’s 45-member powerful standing committee was scheduled to be held on Saturday at 11 am local time. But it was postponed at the last minute.

The prime minister’s press advisor Surya Thapa said the meeting was postponed until Monday as the top leaders of the NCP required more time to forge an understanding on the outstanding issues.

The standing committee meeting has been postponed until 11 am Monday as both the chairs needed time for further discussions, said Bishnu Sapkota, the press advisor to Prachanda said separately.

The much-publicised meeting was supposed to begin at the prime minister’s official residence in Baluwatar to find a way out from the ongoing intra-party crisis which is dragging the ruling communist party close to a split.

Earlier, the standing committee meeting scheduled for Thursday was also postponed as the senior leaders required more time for discussions before formally sitting down for the meeting.

The three-hour-long informal meeting between Prime Minister Oli and NCP executive chairman Prachanda on Friday as the last-minute attempt to rescue the party from a possible catastrophe failed to reach any headway.

During Friday’s informal meeting, the two leaders reviewed the overall situation, including party unity and ways to rescue the party from the present crisis, senior leader Ganesh Shah told PTI.

They also discussed the agenda to be put forth for discussion during the upcoming Standing Committee meeting, he said.

During their Friday talks, Prachanda reiterated his position that Oli should step down but the latter refused, saying he was open to discuss any other issue, except for his resignation, the Kathmandu Post reported.

I won’t resign from both the positions. Do whatever you can, Oli told Dahal, according to Raghuji Pant, a standing committee member.

On Friday, Oli and Prachanda failed whether to follow the May 16, 2018 agreement or the November 20, 2019 understanding reached between them.

In May 2018, when Oli and Dahal announced the formation of the Nepal Communist Party, they had reached a gentleman’s agreement to lead the government in turn, two-and-a-half-years each.

But according to the November 2019 agreement, Oli would lead the government for the full five-year term and Dahal would run the party as executive chairman.

Dahal has maintained that Oli failed to uphold the spirit of the November 2019 agreement, hence he should abide by the May 2018 gentleman’s agreement, making way for him to lead the government.

As the meeting failed to break the ice, with both the sides sticking to their stands, Oli and Prachanda briefly met on Saturday morning to iron out their difference, according to party sources.

As the Saturday morning’s meeting also could not bear any fruit, the party’s Standing Committee meeting scheduled to begin at 11 am (10:45 IST) was put off until Monday,

Prime Minister Oli, 68, on Sunday claimed that there have been various kinds of activities in the “embassies and hotels” to remove him from power.

He said some Nepalese leaders were also involved in the plot in the aftermath of his government updating the country’s political map by incorporating three strategically key Indian territories – Lipulekh, Kalapani and Limpiyadhura.

Raising baseless accusations against India and leaders of his own party by the prime minister was not appropriate, a senior leader of the party quoted Prachanda as saying during the standing committee meeting on Tuesday.

Prachanda has time and again spoken about the lack of coordination between the government and the party and he was pressing for a one-man one position system to be followed by the NCP.

The differences between the two factions of the NCP – one led by Oli and the other led by Prachanda – intensified after the prime minister unilaterally decided to prorogue the budget session of Parliament on Thursday.

According to political analysts, the ruling party may split if Oli did not compromise with the dissident faction.

Meanwhile, a group of the party’s Central Committee members staged a sit-in at the party’s central office at Dhumbarahi to exert pressure on both the sides to avoid a split.

Monday’s Standing Committee meeting will decide whether the party will split or not and whether Oli gives up one of the two positions. Currently, Oli is the prime minister as well as the co-chair of the NCP.

Oli has been cornered in the ruling party as the majority of the senior leaders are with Prachanda. Oli has the support of only 15 members in the 45-member Standing Committee.

The ruling NCP has 174 seats in the 275-member House of Representatives.

Video: The U.S. House of Representatives on Jan. 13, 2021 voted to impeach President Donald Trump over “incitement of insurrection,” making him the first president

Video: The U.S. House of Representatives on Jan. 13, 2021 voted to impeach President Donald

WHO team working with Chinese vaccine producers ahead of potential emergency use: WHO director-general

— In 2021, new waves of COVID-19 infections from the ravaging pandemic are still one

– The House of Representatives on Wednesday made Donald Trump the first U.S. president to

Maghe Sankranti festival, also called Makar Sankranti is one of the popular festivals in Nepal.