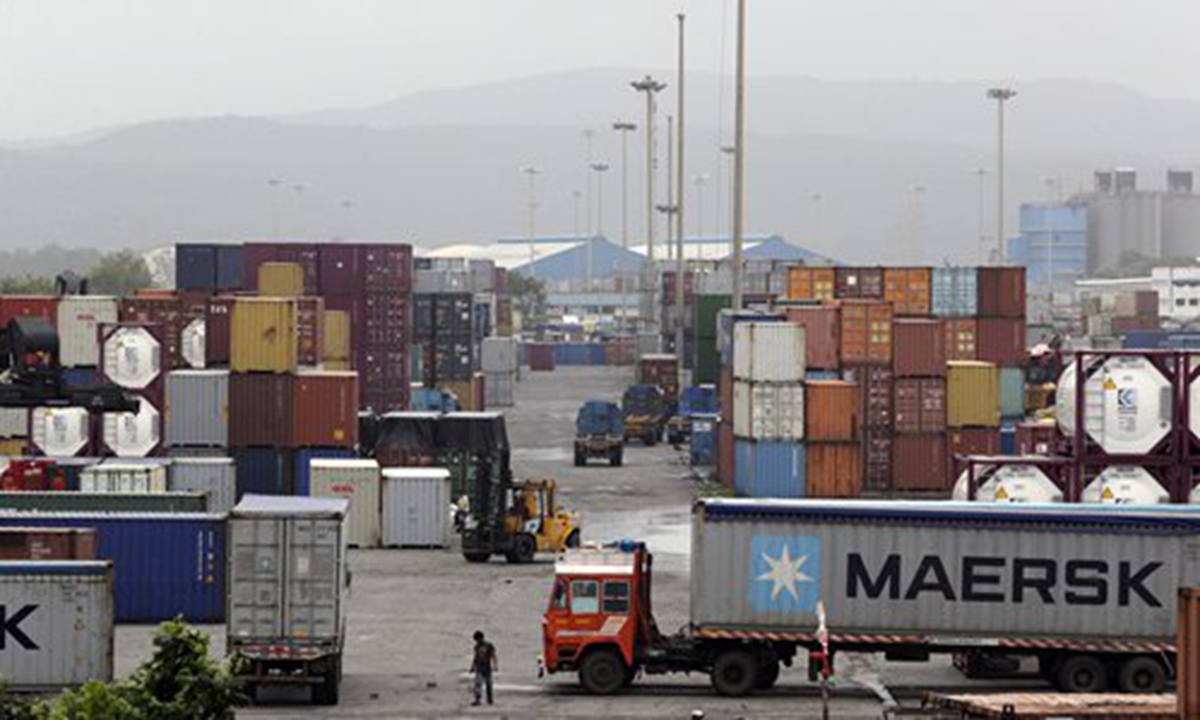 Containers are piled up at a terminal at the Jawaharlal Nehru Port Trust in Mumbai, India. File photo: ICIndia’s Commerce and Industry Minister Piyush Goyal said on Saturday that he has started talks with the EU’s trade commissioner over a free trade agreement (FTA).
While Goyal’s remarks could indicate a marked shift given the long-stalled talks between the two economies, it remains dubious whether the recent restart of trade talks would lead to any concrete result if the Indian side still adheres to its protectionist mentality.

The minister’s mention of the FTA negotiations with the EU came days before the 15th India-EU Summit, which is scheduled to be held virtually in the coming week.

If anything, the minister’s announcement is more of a posturing, intended to send a signal that India will strengthen political and economic cooperation with the EU, after China-India relations turned sour due to the border brawl in June.

Under the current circumstances, political considerations behind India-EU free trade talks are more prominent to any practical economic implications in the short term. Public confidence in India’s economy is fast collapsing due to the wild spread of the coronavirus pandemic throughout India, plus the fresh setbacks India has suffered in its reckless move to restrict Chinese technologies and investment.

Some Indian politicians may believe that closer economic cooperation with a stronger trade partner such as the EU would be enough to offset or balance the trade losses with China. This may explain why the Indian government has made a U-turn in seeking an FTA with the EU, which New Delhi rejected many years ago. However, it remains to be seen whether it could really bring any comfort to the country.

The EU is India’s largest trading partner, accounting for €80 billion ($90 billion) worth of trade in goods in 2019 or 11.1 percent of total Indian trade, on par with the US and ahead of China. But the obstacles to an FTA are staggering.

For one thing, India remains one of the most protectionist countries in the world, with New Delhi dedicated to protecting domestic industries from external competition over the past many years.

There has always been strong opposition to free trade agreements in the country due to its economic structural problems. India has signed FTAs with South Korea and Japan, but has only seen its trade deficits with them grow rapidly.

From the perspective of the EU, its demand for market access to India is high. Take the Vietnam-EU free trade agreement for an example, under which almost 99 percent of the duties imposed on EU exports to Vietnam will have to be phased out over a period of 10 years.

The Modi government has attached great importance to its economic diplomacy, which could not only secure more foreign support for its economic growth but could also help it win broader domestic voters’ support.

Yet, whether such talks could be translated into tangible economic benefits or is just empty talk will depend on whether India can truly shake off its protectionist mentality and improve its market environment.

As an integral part of the global industrial chain, China does not object to closer cooperation between India and the EU. After all, the Indian economy can hardly neglect China’s if it wants to integrate more into the global value chain.

ISLAMABAD: Four Nepali Sherpas on Friday broke the previous record during winters of climbing as

Why to get afraid of election, PM questions