US political system worsens own problems 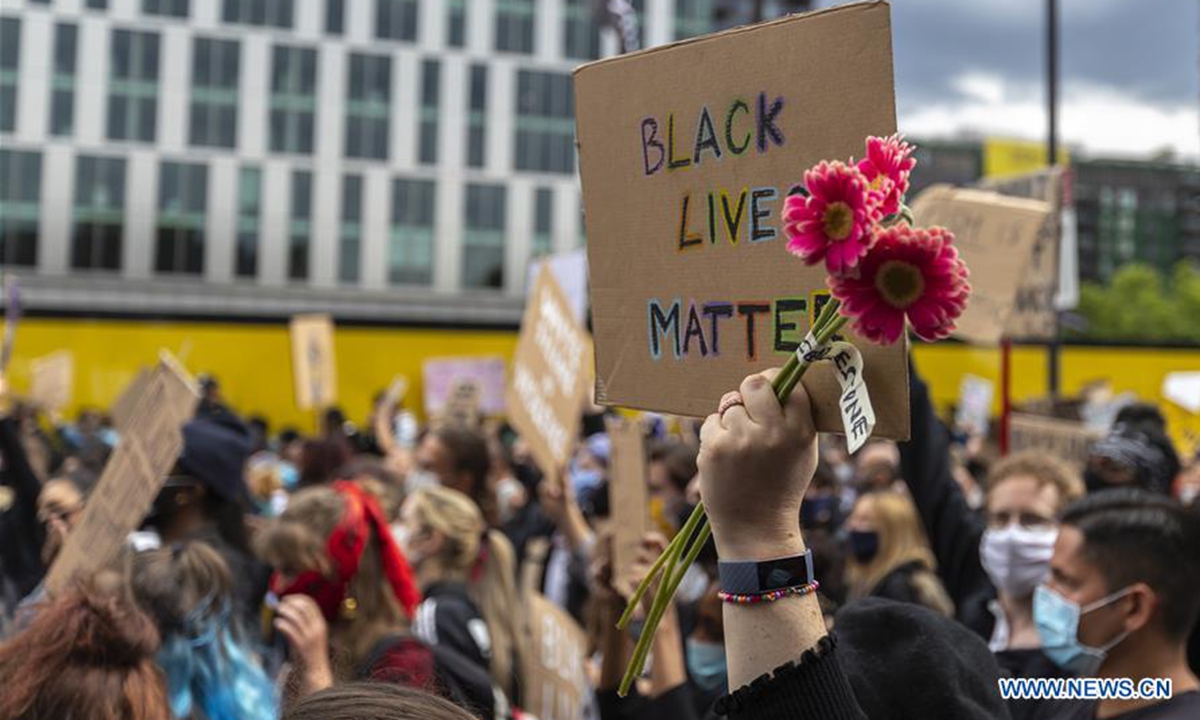 Demonstrators take part in an anti-racism protest outside the U.S. Embassy in London, Britain, on June 7, 2020. On Sunday, tens of thousands of people joined a second day of anti-racism protests in British cities, sparked by the U.S. police killing of George Floyd, an unarmed African American. Protesters gathered outside the U.S. Embassy in London, chanting “silence is violence” and “color is not a crime.” (Xinhua/Han Yan)Protests and riots across the US sparked by the death of George Floyd have developed into a new stage – America’s Cultural Revolution, a broader social movement. Unfortunately, neither the protesters nor Democrats have come up with practical solution to address the long-standing racial problems, but are using the fury of the people to gain political benefit.

Some Chinese netizens said on Chinese Twitter-like Sina Weibo that “It seems like the Cultural Revolution is still going on in the US,” and “Americans are doing something similar to what we did in the 1960s-1970s.” These comments appeared after statues of Christopher Columbus have been toppled in several places in the US and some classic films and TV series became center of public attention for raising flag of racism. 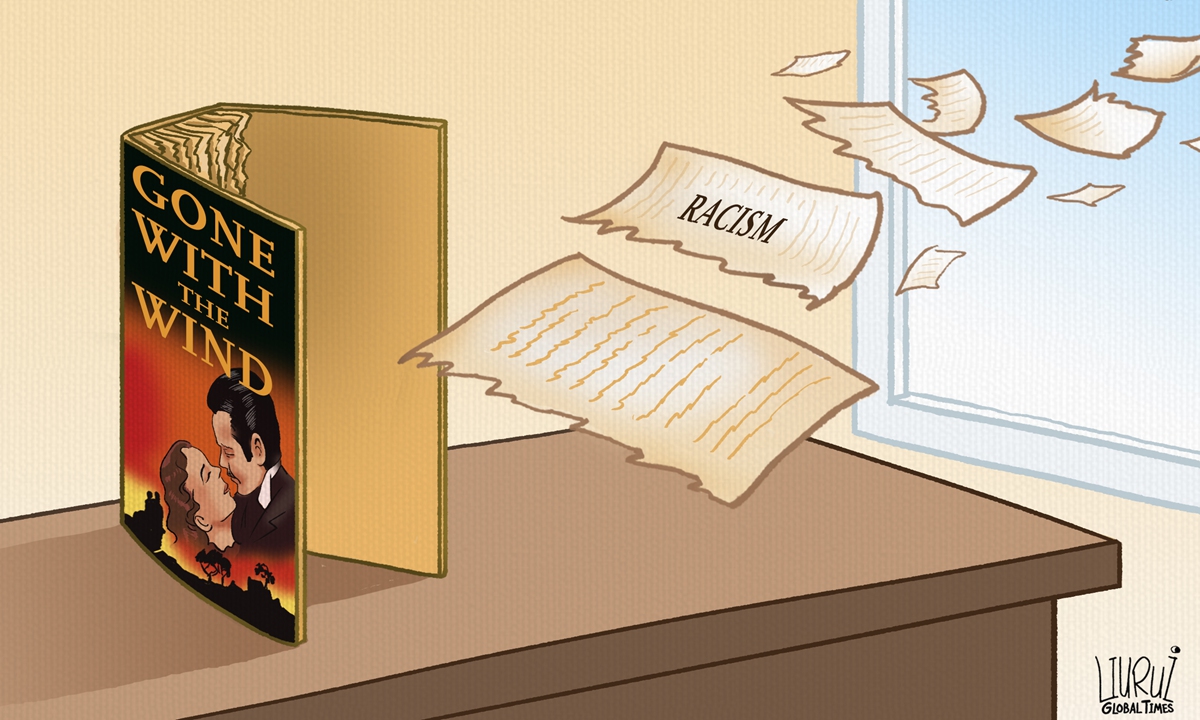 Gone with … racism?  HBO Max removed the film “Gone With the Wind” from its platform citing racist descriptions. Illustration: GT
These acts, such as targeting films and statues, as well as protests in other Western countries sparked by the same reasons, are all useless in solving the real problems faced by minorities and the lower class in the US, because no clear idea or solution has been recommended to reform the unfair social system, said Chinese analysts, adding that with the US hegemony in decline, more domestic problems and conflicts will appear in the future, and the unrests are just the beginning.

Some US mainstream media outlets also share the feeling. The US magazine National Review published an article titled “Welcome to America’s Cultural Revolution” by senior writer David Harsanyi on Tuesday.

“We’re in the dawn of a high-tech, bloodless Cultural Revolution; one that relies on intimidation, public shaming, and economic ruin to dictate what words and ideas are permissible in the public square,” and “it now guides policy on editorial pages at newspapers such as the Philadelphia Inquirer, the New York Times, and most major news outlets,” which refer to the resignations of senior editors of the two newspapers as they oversaw the publication of controversial opinions which oppose the current unrests sparked by Floyd’s death.

Wang Xiao, a commentator of Shanghai-based news website guancha.cn, who studied politics and history in the US for years, told the Global Times that the political elites of the US have always used “identity politics” to divide the lower class since the Cold War era, so that they can shift the conflict between classes into a conflict between different minorities or religious groups or people of different sexual orientation, thus makes it easy for elites to maintain their advantage in a capitalist system.

“We see a lot of labels for different minority groups in the US, such as African Americans, Asian Americans, Latin Americans or LGBT,” but not proletariat  or bourgeoisie, which reflects the theory of Marxism, Wang said. So it is easy for the US elites to issue policies to satisfy specific groups, and division among different groups can effectively prevent the lower class from uniting and even launching a revolution to fundamentally change the US system.

Similar protests caused by identity politics happened occasionally in recent years. In 2017, a Unite the Right rally organized by white nationalists was held in Charlottesville, Virginia to oppose the proposed removal of the statue of General Robert E. Lee, commander of the Confederate States Army during the American Civil War, also led to clashes.

General Lee’s statue has also been targeted by protesters this time, and the deep-seated crisis of human rights and class divisions in the US are getting increasingly serious beneath America’s Cultural Revolution. People participate in a protest over the death of George Floyd near the Palace of Justice in Brussels, Belgium, June 7, 2020. (Xinhua/Zheng Huansong)Political correctness

Fox News TV host Tucker Carlson even said, “the Cultural Revolution has come to the West.” Last weekend, during a Black Lives Matter protest in London, the statue of Winston Churchill in Parliament Square was defaced with graffiti that read “Churchill was a racist.” And an opinion piece published by CNN Wednesday said, “Yes, Churchill was a racist. It’s time to break free of his ‘great white men’ view of history.”

Lü Xiang, a research fellow on US studies at the Chinese Academy of Social Sciences, told the Global Times that these activities show that Western countries with a large number of immigrants have similar problems, but, unfortunately, there is no leading force or political party to unite the protesters on the core issue, and the Democrats only want to win the election.

US media reported that leading Democrat politicians, including presidential candidate Joe Biden and House speaker Nancy Pelosi, voiced their support to the protests by attending Floyd’s funeral or getting down on one knee.

But none of them touched on core issue of inequality suffered by African Americans and other minorities, Chinese observers said.

What they are doing is to “make a show” to win more votes, to use the anger of the people to serve their political interests, and this is how political correctness works for them, said Lü.

US President Donald Trump, officials like Secretary of State Mike Pompeo, as well as other Republicans failed to effectively address the issue as well. They blamed foreign forces for inciting the riots in the US, said Chinese experts.

“The Trump administration is using another kind of ‘political correctness’ that panders to white people to divert the anger from the poor white people – blame Latinos for stealing their jobs; blame the blacks for looting their properties; blame the Chinese for taking their factories; and blame Muslims for making them insecure,” Lü said.

Fan Yongpeng, a US studies expert and deputy director of the China Institute at Fudan University in Shanghai, told the Global Times that the partisan politics between Democrats and Republicans makes the US almost impossible to reform to effectively respond to the demands of its people. And due to educational and political culture of the US, as well as its market economy, it is almost impossible for Americans to fundamentally reform its capitalist system, even if it is very problematic and uneven. 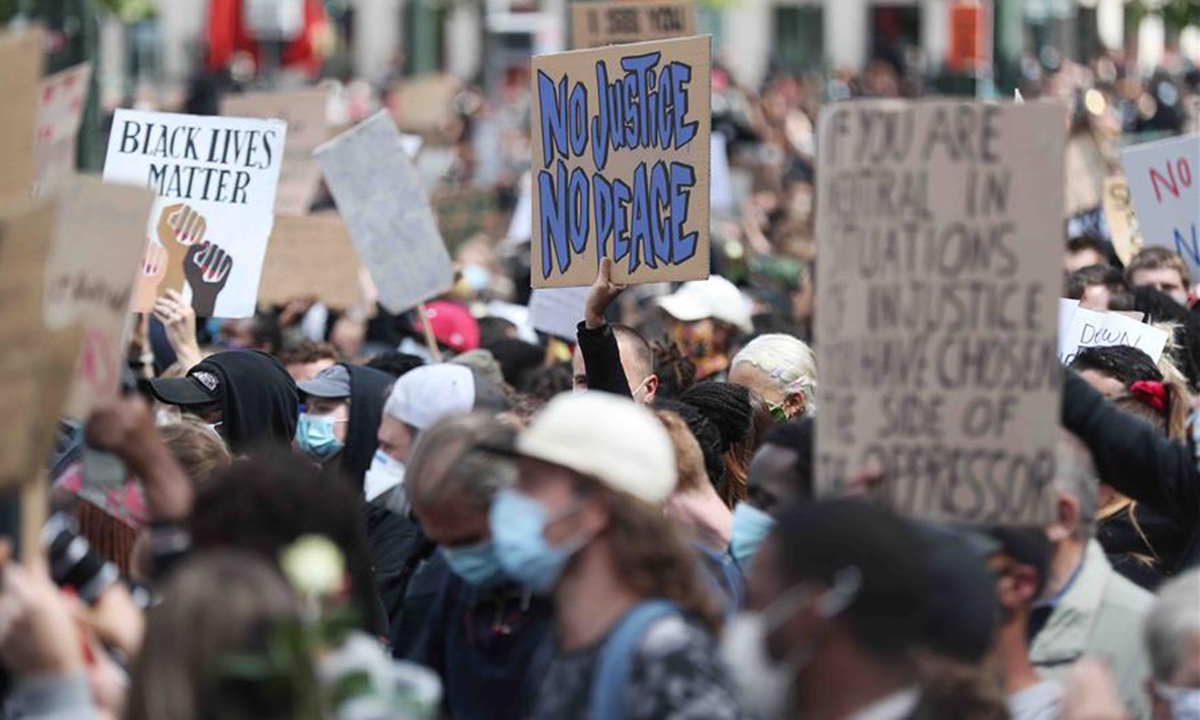 People participate in a protest over the death of George Floyd near the Palace of Justice in Brussels, Belgium, June 7, 2020. (Xinhua/Zheng Huansong)Divided country

As its hegemony weakens, adding the external impacts such as China’s rise, America in the future would be more divided, and the unrest is just a beginning, Chinese analysts said.

“The federalism and separation of powers in the US has buried the seeds to potentially separate the country. But in the past, due to the unshakable US hegemony, the country avoided this problem by plundering other countries through wars and US-led globalization,” he said.

The rise of China and other changes in the world have prevented the US from continuing this game. So, the potential of a split of the US could gradually emerge, Fan noted.

Lü said that in the past, when the US dominated the world order, it could create foreign enemies to cover its domestic problems. But after the wars in Iraq and Afghanistan, it is very clear that US hegemony has weakened and it is unlikely to play old tricks as it can’t afford to.

“The US will be increasingly incapable of carrying out political reform or launching wars overseas. To what extent it could cover or fix its own deep-rooted problems remains a big question to the world. We hope the US can be stable, but only Americans can save their own country,” he noted.

Kathmandu, March 4 : The government and the Netra Bikram Chand ‘Biplav’-led Maoist party have