Time to cool down Indian nationalism 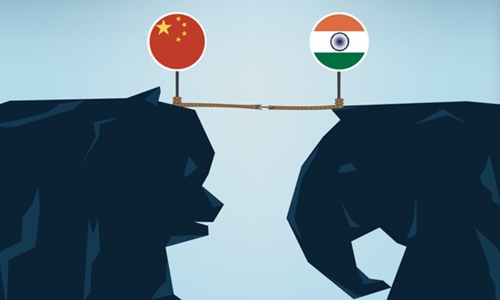 Commander-level talks between Chinese and Indian border troops were held on Monday. It was the first such meeting following the Galwan Valley deadly brawl on June 15.

The dialogue is significant as the two sides are able to understand each other’s bottom line better, amid the border tensions.

The last round of bilateral commander-level talks was held on June 6. By then, both sides agreed to avoid escalating their disputes, to work together to uphold peace and tranquility along the border, and to create a favorable atmosphere for the sound and stable development of bilateral relations. Reports show both China and India agreed to disengage their troops in sensitive areas. Yet the Indian side violated the June 6 consensus. They blatantly crossed the Line of Actual Control and forcibly demolished the Chinese troops’ tents.

During Monday’s talks, the two sides agreed to take measures to defuse the tensions, continue to dialogue and work together for peace and tranquility on the ground along the border. With that willingness from both countries, tensions will be controlled in the near future.

Yet compared with the Doklam standoff in 2017, India has displayed much stronger nationalism this time.

In 2017, Indian troops crossed into land disputed between China and Bhutan. The move triggered a China-India border standoff for of more than two months and was later very much sensationalized due to Indian nationalism. But the Indian government’s response was restrained then.

Unfortunately, Indian authorities have instigated radical Indians’ “boycott China” campaign this time around. The Indian Department of Telecommunications has asked state-owned operators to keep Chinese vendors out of their tenders, and is considering advising private companies not to use China-made equipment in their networks. India’s Maharashtra state has halted three investment proposals from Chinese companies.

Despite the fact that Indian Prime Minister Narendra Modi admitted that “nobody has intruded into our border,” the radical Indian nationalism has piled huge pressure on the country’s authorities, which later carried out uncooperative measures toward China in order to appease public opinion.

Nationalism has had a long history in India. After Indian troops, which tried to invade Chinese territory along the border in 1962, were defeated by China in a war, India has been shifting its responsibility to China, accusing the latter of provocation. Soon afterward, anti-China propaganda crept into Indian society.

This time, the border clash was also triggered by provocation from the Indian side, yet Indian society, including many Indian media outlets, again put the entirety of the blame on China and set the public’s nationalistic sentiment ablaze.

As a result, such anti-China sentiment has raised anger and antipathy among the Chinese people, and has shaped an unhealthy circle of hostility between the publics of both sides, which, frankly speaking, will be hard to turn around.

The year 2020 marks the 70th anniversary of the establishment of diplomatic relations between China and India. The two sides have planned relevant commemorative events, hoping to push forward the development of bilateral relations to a new level.

However, the Galwan Valley brawl might become a new turning point in China-India relations. But, neither China nor India actually wants to see a military conflict break out between them.

Communication and collaboration should continue, be it in economic and trade sectors or in people-to-people exchanges. High-level talks and people-to-people interactions are necessary to manage divergences and defuse tensions. More importantly, how to guide public opinion in the two countries, especially containing nationalism in Indian society, should be seriously considered.

The article was compiled by Global Times reporter based on an interview with Long Xingchun, senior research fellow of Academy of Regional and Global Governance, Beijing Foreign Studies University and president of Chengdu Institute of World Affairs. [email protected]