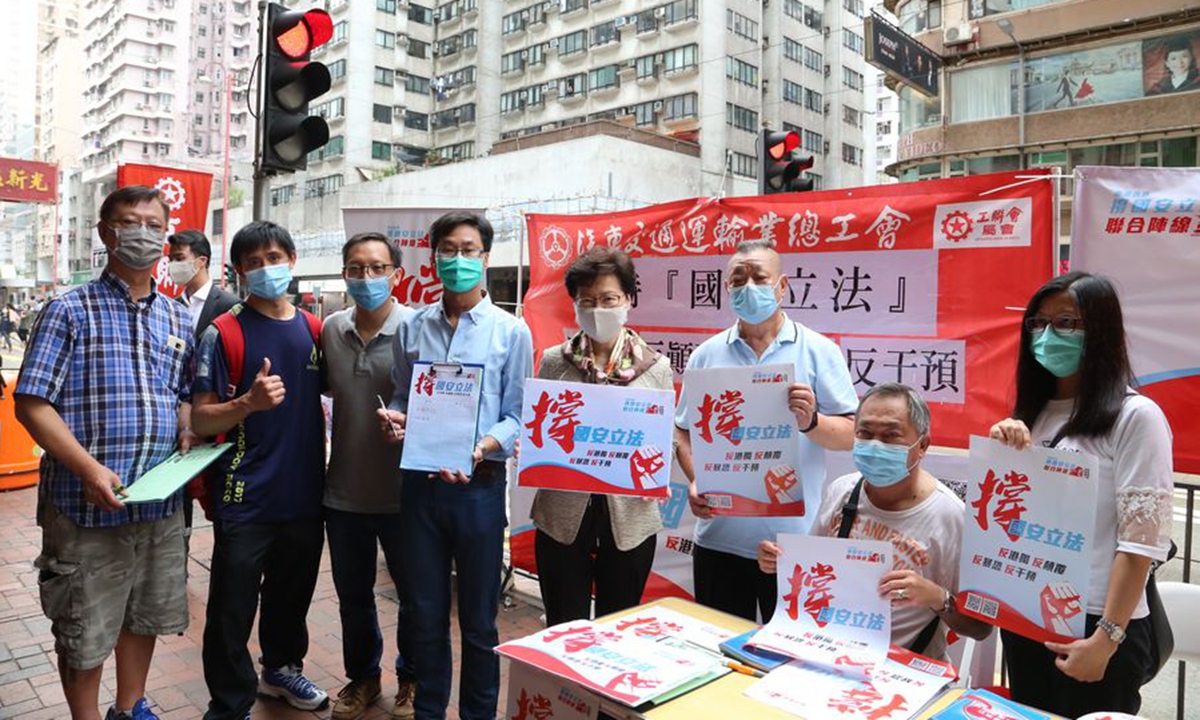 Chief Executive of the Hong Kong Special Administrative Region Carrie Lam visits a street stand and signs a petition in support of the national security legislation in Hong Kong on May 28. Photo: Xinhua.

Beijing: The national security law for Hong Kong is expected to be passed soon, and has already had an effect in Hong Kong’s society.

Anson Chan Fang On-sang, Hong Kong’s former chief secretary, a key figure in the city’s unrest, announced on Friday she will quit politics. Martin Lee Chu-ming, one of the “Gang of Four” in disrupting Hong Kong, openly criticized Hong Kong secessionists in a recent interview. Wayne Chan Ka-kui, convener of the illegal “Hong Kong Independence Union,” has fled to Europe. Horace Chin Wan-kan, author of the book On the Hong Kong City-State, also announced he is quitting the social movement in the city. Some people say that Hong Kong’s traitors are turning upside-down in the face of the coming national security law.

The national security law for Hong Kong will definitely become a new starting point for the city, but struggles will continue. Chinese society, including Hong Kong society, must be prepared to support the enforcement of the law in the city after it is passed, to punish a few diehards who have been committed to jeopardizing national security, and to fight some tough battles against US interference in Hong Kong, to truly establish a line of defense on national security there.

The few die-hard radical forces in Hong Kong should be warned that the national security law could never be overthrown by mobilizing enough people to protest in the streets as they did with the extradition bill last year. This time, it is the National People’s Congress which enacted the legislation, and the whole country will play a role in Hong Kong. The strength and will of 1.4 billion Chinese people will not let it fail.

Hong Kong has returned to China, but a handful of extremists are willing to be pawns of anti-China force of the US. They use the latter’s support as their leverage in Hong Kong to stir up trouble for political gain. They have betrayed Hong Kong and their country. They have made the wrong bet, and now it’s their last chance to stop their wrongdoings before it’s too late.

The law will not change Hongkongers’ way of life, nor will it deprive people of any legal rights there, including freedom of speech. But instigating Hong Kong secession and encouraging foreign forces to “sanction” Hong Kong are equivalent to treason. They have nothing to do with the freedom required by Hong Kong people, and are loopholes in the rule of law.

The forces that oppose the national security law are bound to lose, because the law is righteous. Its political and legal legitimacy can withstand the test of history. The forces who support the law are morally justified and will be motivated. Those who oppose it are opportunistic, and will be easily shaken.

Washington’s will to invest in Hong Kong’s unrest is limited. Such a will does not match Beijing’s resolve to defend “one country, two systems.” When the national security law for Hong Kong confronts the US’ so-called Hong Kong Human Rights and Democracy Act, the latter will be immediately overwhelmed.

The US is entangled in COVID-19, and the fallout from racial issues is unprecedented. It has no ability to sustain a long-term intensive attack against China’s core interests. The development of Hong Kong’s situation will be dominated by China, and the city will gradually return to the right track under the framework of the Basic Law. All people living in Hong Kong must understand that the city will not be determined by the US.

All people and forces that go against such a trend will lose. It is best for them to immediately make adjustments that respect the national security law for Hong Kong.

EDITORIAL : With the second wave of COVID-19, the country is mired in an epidemic.

Kathmandu, 6 May: Twenty-five people have died in various hospitals across the country from Wednesday

Kathmandu 6 May : The Federation of Contractors’ Associations of Nepal (FCAN) has stated that

Some private hospitals to face music for collecting exorbitant fees

Kathmandu 6 May : Ministry of Health and Population has announced to take action against

Pokhara 5 May : Newly-appointed chief of the Gandaki Province, Sita Kumari Poudel assumed her

London 5 May : British Gurkha Satyagraha has submitted a memorandum to Prime Minister of

Dhangadi 5 May : The death toll in a jeep accident in Baitadi has reached