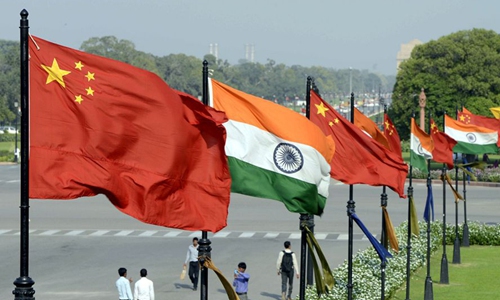 Chinese and Indian troops were engaged in a serious physical clash in Galwan Valley on Monday. The Indian side said three Indian soldiers were killed. The Chinese military confirmed that clashes between the two sides have led to casualties, but did not release the exact figures.
This has been the most serious clash between Chinese and Indian soldiers so far. Indian media reported this is the first time since 1975 that soldiers died in border conflicts between the two countries.

India has been building extensive infrastructure facilities along the border, and forcibly built part of the facilities in the Chinese side of the Line of Actual Control regardless of bilateral divergences over the border disputes. The two sides went into repeated physical clashes as Chinese soldiers tried to stop their Indian counterparts.

The arrogance and recklessness of the Indian side is the main reason for the consistent tensions along China-India borders. In recent years, New Delhi has adopted a tough stance on border issues, which is mainly resulted from two misjudgments. It believes that China does not want to sour ties with India because of increasing strategic pressure from the US, therefore China lacks the will to hit back provocations from the Indian side. In addition, some Indian people mistakenly believe their country’s military is more powerful than China’s. These misperceptions affect the rationality of Indian opinion and add pressure to India’s China policy.

The US has wooed India with its Indo-Pacific Strategy, which adds to the abovementioned misjudgment of some Indian elite. In 2017 when Indian troops crossed the line and entered the Doklam area to openly challenge China’s territorial sovereignty, their craze was caused by such arrogance. Such an aggressive posture has won praise from the Indian public, which means that the Indian elite’s mentality toward China is unhealthy and dangerous.

China does not want to clash with India and hopes to peacefully deal with bilateral border disputes. This is China’s goodwill, not weakness. How could China sacrifice its sovereignty in exchange for peace and bow to threats from New Delhi?

China and India are big countries. Peace and stability along border areas matter to both countries as well as to the region. New Delhi must be clear that the resources that the US would invest in China-India relations are limited. What the US would do is just extend a lever to India, which Washington can exploit to worsen India’s ties with China, and make India dedicate itself to serving Washington’s interests.

The gap between China’s and India’s strength is clear. China does not want to turn border issues with India into a confrontation. This is goodwill and restraint from China. But China is confident in the situation at the border. It does not and will not create conflicts, but it fears no conflicts either. This policy is supported by both morality and strength. We will not trade our bottom line with anyone.

The clash in the Galwan Valley this time has led to casualties on both sides, indicating China-India border tensions, amid constant frictions, may spiral out of control. We notice that the leadership of the two militaries has exercised restraint after the incident, indicating that both sides would like to handle the conflict peacefully and not let the conflict escalate. It is noteworthy that the Chinese side did not disclose the number of casualties of the Chinese military, a move that aims to avoid comparing and preventing confrontational sentiments from escalating.

We would like to see tensions in the Galwan Valley subside. It is hoped that the Indian side can strengthen management of frontline troops and engineers, and adhere to the consensus reached between the leadership of the two militaries. It will benefit both sides if the situation cools down, and it needs the efforts of both Chinese and Indian frontline troops.

On the China-India border issue, the Chinese public should trust the government and the People’s Liberation Army. They will firmly safeguard China’s territorial integrity and maintain national interests when dealing with border conflicts. China has the ability and wisdom to safeguard every inch of its land and will not let any strategic trick meet its end.

PM Oli launches COVID-19 vaccination campaign: all citizens to get it within three months

Kathmandu, Jan 27  : A vaccination campaign against COVID-19 has begun across the country from today under the slogan ‘Health, Prosperity and Safety: COVID-19 Vaccine

PM to launch vaccination against COVID-19

PM Oli launches COVID-19 vaccination campaign: all citizens to get it within three months

Kathmandu, Jan 27  : A vaccination campaign against COVID-19 has begun across the country from

Kathmandu, Jan 27  :  President Bidya Devi Bhandari has expressed sorrow over the damage of

PM to launch vaccination against COVID-19

Kathmandu, Jan 26  : The Nepali team of 10 mountaineers, who created a new world

Kathmandu, Jan 26  : On the occasion of the Republic Day of India, President Bidya