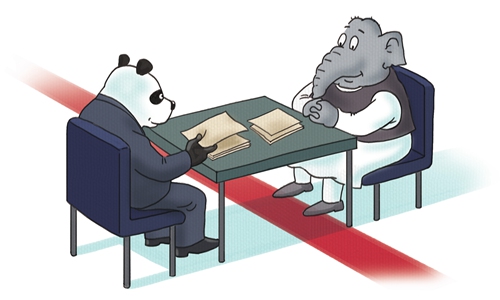 According to Indian media reports, India gave “complete freedom of action” to commanders deployed along the Line of Actual Control (LAC) to “handle situations at the tactical level.” Moreover, the commanders would no longer be bound by restrictions on the use of firearms in “extraordinary situations.”

If this is proved to be true, the latest development seriously violates the Agreement on Confidence Building Measures in the Military Field along the Line of Actual Control in the China-India Border Areas. Although border face-offs occasionally erupt between China and India, the troops of the two countries haven’t opened fire on each other for decades. If Indian soldiers use firearms against Chinese soldiers in the future, there will be a different picture in the border areas.

I must warn Indian nationalists: If your soldiers cannot even defeat Chinese soldiers in unarmed clashes, then guns and other firearms will not help them. The reason: The military strength of China is much more advanced and stronger than that of India.

Some Indians arrogantly believe that the modernization of Indian troops will allow them to defeat the Chinese People’s Liberation Army and take revenge on China for India’s defeat in the 1962 border war. I’d love to tell them that there was not much difference between China and India in terms of economic strength in 1962, but today, China’s GDP is about five times that of India and China’s military expenditure is over three times that of India according to Western estimates. If India escalates the border dispute with China into skirmishes or even local wars, it would be like an egg dashing itself against a rock.

China doesn’t want to escalate conflicts with India, but we have sufficient capacity to smash any provocations from the Indian troops. It’s hoped that Indian troops can remain sober and Indian elites keep rational. It’s in the India’s interests to work with China to put the border disputes under control.

The author is editor-in-chief of the Global Times.